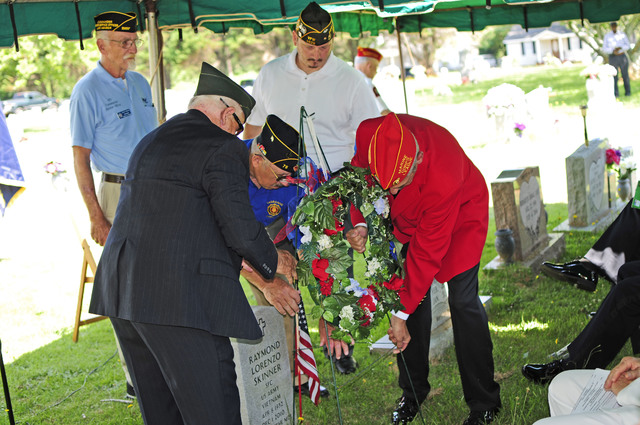 Members of the PFC George Eiland Detachment of the Marine Corps League post the colors at the beginning of Monday’s Memorial Day ceremony at Southview Cemetery.

http://lagrangenews.com/wp-content/uploads/sites/37/2016/05/web1_web0531MemDay03.jpgMembers of the PFC George Eiland Detachment of the Marine Corps League post the colors at the beginning of Monday’s Memorial Day ceremony at Southview Cemetery.

Members of the West Georgia Veterans Council lay a wreath at the grave of U.S. Army Sgt. 1st Class Raymond Lorenzo Skinner, who served in Vietnam, at Southview Cemetery during a Memorial Day ceremony Monday.

http://lagrangenews.com/wp-content/uploads/sites/37/2016/05/web1_web0531MemDay01.jpgMembers of the West Georgia Veterans Council lay a wreath at the grave of U.S. Army Sgt. 1st Class Raymond Lorenzo Skinner, who served in Vietnam, at Southview Cemetery during a Memorial Day ceremony Monday.

LaGRANGE —LaGrange Public Safety Chief Lou Dekmar told a small but patriotic group gathered in the Southview Cemetery on Monday that four words: freedom is not free, “are the currency of our lost brothers and sisters.”

Dekmar was the speaker for the West Georgia Veterans Council’s annual Memorial Day observance. He told the crowd he routinely flies to Washington, D.C., for events and is always stirred when the plane takes him over the Patomac River and he can see the numerous monuments, “each a sad and honorable reminder of the sacrifices our fellow citizens have made to our country.”

He noted how the Pentagon reminds him of the losses of Sept. 11, 2001, where nearly 200 people died from the plane that struck that building alone. Nearby is the stainless steel United States Air Force Memorial, and then Arlington Cemetery — the former estate of Robert E. Lee — where Dekmar noted Army guards make a meticulous step pattern of 21 steps in front of the tomb of the unknowns before pausing 21 seconds to walk back across the tomb in 21 steps.

“Typically, I walk the memorials in the evening, when the night skies provide a mournful and hushed presence that I don’t sense during the day,” he said.

He usually starts at the Lincoln Memorial before moving to the Vietnam Veterans Memorial, which displays 58,307 names of people killed in action, missing or prisoners of war during the conflict. He noted 1,581 are from Georgia.

“Along the walls are small flickering candles, dated pictures of those that will never grow old, broken flowers of remembrance and handwritten notes from loved ones who, despite the passing decades, feel the agony of their loss as if it was yesterday,” Dekmar said. “In reading several of the notes, I’m reminded and moved by the continued sacrifice of the families, and the pain in their hearts that will ebb only when they find their grace.

“The wall is particular to me because I served in the Vietnam era, which I did in 1975. I did not serve in country, but many of my fellow airmen did. And although there was much civil unrest throughout America during that period, particularly as it comes to the draft, it may be a surprise to some that almost 70 percent of Vietnam casualties were not draftees, but volunteers.”

At the World War II Memorial, he said he is reminded of the 60 million people killed, of those 407,013 American Military men and 513 women, with more than 5,700 from Georgia. Of those, 84 were from Troup County, he said.

On the Freedom Wall, on the west side of the memorial, he noted the 4,048 gold stars, each representing 100 Americans who died in the war, and its inscription: “Here we mark the price of freedom.”

At the Korean War Veterans Memorial — which commemorates the more than 36,000 Americans, including 757 Georgians, who died in the more than three-year conflict — is where Dekmar noted the inscription “freedom is not free” carved into the granite wall at the Pool of Remembrance.

The ceremony concluded with members of the West Georgia Veterans Council laying a wreath at the grave of U.S. Army Sgt. 1st Class Raymond Lorenzo Skinner, who served in Vietnam. They saluted the late veteran’s memory, and the Rev. Dalton Hammock, chaplain of the Marine Corps League, gave a benediction and Johnny Griggs, field musician for the Marine Corps League, played taps.

‘I really want to serve my country’