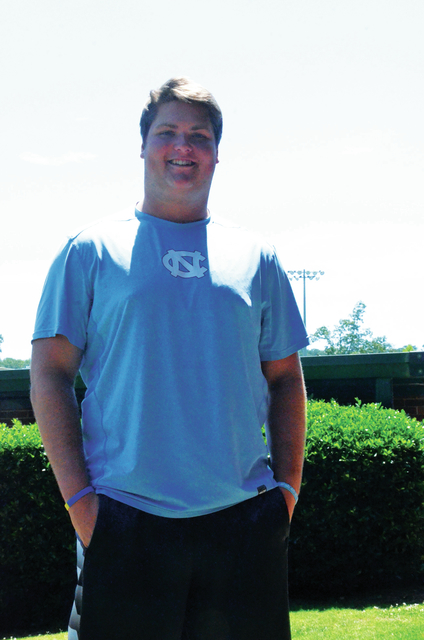 LAGRANGE – He’s ready to get back to doing what he loves.

The last time Luke Elder was on a football field in a competitive situation was in the final game of the 2014 season when the LaGrange Grangers lost in the first round of the state playoffs.

That was more than 18 months ago.

During LaGrange’s spring game in April of 2015, Elder went down with an ACL injury, and he ended up having surgery, and he missed his entire senior season.

Around the same time Elder was given full clearance to resume training after recovering from the knee injury, he was dealt another blow.

In December, he noticed a lump on his thigh, and a visit to his doctor in LaGrange revealed that he had a form of cancer called myxoid liposarcoma, and it was malignant.

Elder went through a series of radiation treatments and two surgeries, and the cancer was beaten.

Last week, Elder visited a doctor he’s been working with at Duke University in Durham, N.C., near where he’ll be playing football at the University of North Carolina, and he was given great news.

While he’s been able to consistently work out all through the treatment and the surgeries, he hadn’t yet been fully cleared to go 100 percent on a football field.

His doctor at Duke, Brian Brigman, gave him that go-ahead.

“It was awesome,” Elder said. “It was the best visit we’ve had there. Things were going good with the last one. They took out the stitches. But we were hoping to be able to do more. This one we showed up, and they said everything looked great. I’m cleared to do whatever I want, as long as I feel like I can do it. It’s all about what I think I can handle at this point.”

Elder, an offensive lineman, will move to Chapel Hill this week, and he’ll begin working out with his teammates, and then in early August, it’ll be go time as preseason practice gets under way.

For the first time in more than a year, Elder will put the pads and helmet on, and he’ll be back to knocking people around.

“It’s crazy to think how long it’s been since I had pads on, since I just practiced,” Elder said. “I’m a little nervous about it. But I’m also so excited. I can’t wait. I’m going to show up at UNC and start doing full workouts with the team again. It’ll just be good to get back on the field.”

Elder, despite the setbacks of the past six months, doesn’t feel he’s that far behind physically where he would be otherwise.

He has been going at it hard with his trainer, and for the past month, he’s been working with former LaGrange High teammate Kevin Ramirez, who’ll be a sophomore offensive lineman at Shorter this fall.

Elder has been tested mentally, emotionally and physically over the course of the past year, but he has stayed strong.

From the ACL injury that cost him his senior season, to the cancer that had the potential to cost him so much more, Elder has never stopped fighting.

“Things happen,” he said. “And they can be really bad. But you can’t let them be the end of the world. You have to keep that positive attitude, and trust that things will work out, if you say strong to your faith, and stay strong to the people around you.”

Elder said what he has come to realize over the past year is how phenomenal his support system is.

His family members, including his father Jared, his mother Christy and his sister Sally, his friends and former teammates, and others he didn’t even know that well before have all been there for him.

“I have a different perspective from a lot of people,” Elder said. “There are so many more people than you realize who support you. Even the ones you think are there, are there even stronger.”

Elder’s Christian faith has also helped him make it through some tough times.

Have there been a few ‘why me’ moments along the way?

But Elder’s attitude has always been that whatever he’s confronted with will only make him stronger in the long run.

“I had the ACL, and the second I get through with that, there’s cancer,” Elder said. “I was angry. I went through the whole realm of emotions with Him. I was angry at God. And then I was just thankful that he let me go through it, and got me through it, and has shown me how I can use all of the obstacles that are put in your way.”

Elder said his mindset was “whatever comes my way at this point, I’m going to deal with it, I’m going to get through it and keep doing what I love to do, and that’s play football. I got discouraged at times. But it never took me over. Maybe for a couple of hours I’d be like, dang, this really sucks. But then I’d jump right back in there with a positive attitude, and I just said I’ve got to work through it.”

During his playing days at LaGrange, Elder had established himself as a high-level recruit before his junior season, and big-time programs from across the country were vying for his services.

Late in the spring of 2015, Elder announced that his recruitment was over, and that he was going to North Carolina, and he made that official when he signed his letter of intent in February.

Elder said the way head coach Larry Fedora and the other folks at North Carolina have been so supportive over the past year made him realize how right that decision was.

“Every step of the way through this whole thing since I tore my ACL, that decision to go to UNC has been made more firm, just by how they handled all the different things that have happened to me,” Elder said. “They continue to hold strong to the promise that when I committed to them, they were committed to me. Every step, they’ve just made sure that they trusted me to get back, trusted me to work hard, and do what the doctor said. And it’s all paid off.”

Elder does regret he was unable to play during his senior season at LaGrange, and he said it was difficult to be on the sidelines watching his teammates play.

“I knew I could have contributed, especially this year where we struggled at times,” Elder said. “I could see if I could be out there I could make a difference.”

Elder knew he had to take a big-picture view, though.

He couldn’t rush back before he was 100 percent healthy and risk injuring himself again, and he said head coach Dialleo Burks and everyone else understood that and were completely supportive, but that didn’t make it any easier to not be on the field.

“Especially the high-school coaches, they understood what my final goal was,” Elder said. “It worked out in the long run. Now I’m 100 percent heading into college. But to miss my senior season, it was a big hit.”

Elder is eager to take the next step in his life.

During the time he has spent on the North Carolina campus, he has fallen in love with the school, and he’s looking forward to being a part of the Tar Heel family.

“That campus is a winning campus,” Elder said. “I don’t care if it’s football, basketball, lacrosse, soccer. I’m getting into sports I never even knew existed. Everybody there is just driven to do something, whether it’s to get a medical degree, or win national championships in any sport. It’s a different atmosphere. It’s really something special.”

As for football, it’s a good time to be a Tar Heel.

It was a happy day for Luke Elder and his family in February when he signed his letter of intent to play football at North Carolina. With Elder are his mother Christy Elder and his father Jared Elder, his sister Sally Elder, his head coach at LaGrange, Dialleo Burks, and his trainer, Kane Bradfield. Kevin Eckleberry | Daily News

http://lagrangenews.com/wp-content/uploads/sites/37/2016/06/web1_Elder2.jpgIt was a happy day for Luke Elder and his family in February when he signed his letter of intent to play football at North Carolina. With Elder are his mother Christy Elder and his father Jared Elder, his sister Sally Elder, his head coach at LaGrange, Dialleo Burks, and his trainer, Kane Bradfield. Kevin Eckleberry | Daily News