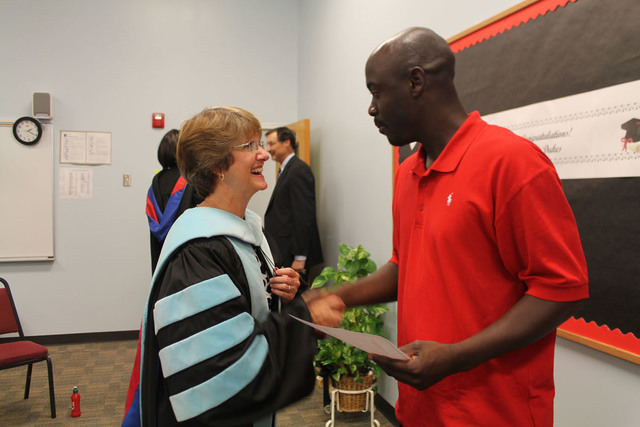 LaGRANGE — Giving children the gift of learning could not be greater, according to Nathaniel Dukes. He just received his high school diploma during a ceremony held at The Hope Academy on Wednesday.

Dukes, 32, failed to pass a science class while in high school about 15 years prior. That, along with not passing the graduation exam, which was required by the state at the time, deterred him from receiving his diploma.

Last April the state passed House Bill 91, which eliminated the graduation exam requirement and opened up the opportunity for many to receive diplomas. Just like many others who petitioned for their diploma, Dukes was in line to receive his. The father of three thought he would finally qualify to obtain his diploma, but he was two physical science courses shy.

Determined, Dukes and his wife, Latausha, began making phone calls to the school system office to find out how he could make his dream a reality. During one of those calls, they learned about Project HYPE, which stands for “helping young people excel.” The program had been in existence for two years and the Dukes family hoped it would be the conducive learning environment he needed to pass the courses by graduation.

“Students in this program may need a little extra help to pass a class, they may be a working parent or they just may not have gotten the fundamentals the first time around,” she said. “We want to see everyone graduate, so it’s good to offer programs like HYPE that give all students an opportunity to earn a diploma.”

The abbreviated curriculum is taught using a program called E2020. It is facilitated by Troup County School System teachers at The Hope Academy after school Monday to Thursday.

Going through the program allows students to work at their own pace and be given a percentage completion based on how far they have gone within the designated class. Participants focus only on classes they need to receive credit in. While it sounds easy enough, for Dukes there were some major hurdles.

“I enrolled in the program in the fall of last year, but I worked swing shift and couldn’t make the classes like I needed to,” he said. “I would miss a week at a time because of work. I have to provide for my family, so I had to work. Because of missing class and not having a laptop or computer at home, I was falling a little behind. When Mr. (Aiden) Blackwell (the teacher) asked if I could come in on Fridays, that’s what I started doing. He was there every time to help me.”

Teacher and HYPE facilitator Blackwell said Dukes had completed 11 percent of the physical science courses when they met.

“I noticed he was writing everything down and wasn’t making a lot of progress,” Blackwell said. “I was able to help him figure out what he needed, and what he didn’t need.

“Dukes would come every other week because of his work schedule so I would just pull him (out of the general sessions) and work with him individually. I also suggested he come on Fridays so he could be closer to his dream of finishing high school, and he did that. After that, I just helped him manage his learning time. You could tell he had a will and a drive to finish. And he did that too.”

During the process, Dukes eventually purchased a laptop so he could study at home. It was stolen shortly after he purchased it, but he didn’t let that stop him. After saving and doing some bargain shopping, he found a used laptop and purchased it.

His wife encouraged him by being a strong motivational partner and by ensuring their three children didn’t bother their father while he was studying.

“He had to have his quiet time so he could study,” said Latausha Dukes. “He needed to get through his work because graduation was coming up and he wanted to be ready for it. We also wanted him to meet the May deadline, so it was important to give him that time and space free of the children.

“I am absolutely proud of him,” she added with a smile. “He worked swing shift and then went to classes in the afternoon. Sometimes he would only have a couple of hours to sleep. Now, he is encouraging others to join HYPE so they can get their diploma too.”

Nathaniel Dukes said graduating is also an encouragement to his 10-year-old son.

“I tell him that he is either going to finish school and go to college, or go into the military,” Dukes said. “How can I tell my son that and I didn’t do it? As a parent, that just doesn’t add up, so this is going to show him that it can be done.”

Dukes beamed and was almost speechless as Fagg, the principal; Cole Pugh, school system superintendent; and Penny Johnson, director of secondary education, conferred his diploma in front of family and friends.

“This is an awesome achievement,” he said.” I was embarrassed coming at first. I was the oldest person in the classroom, but I got over that. Now I am the first person ever to finish the program.”

Nathaniel Dukes and his wife, Latausha, pose for a photo Wednesday at The Hope Academy after Nathaniel Dukes earned his high school diploma through the Project HYPE program.

http://lagrangenews.com/wp-content/uploads/sites/37/2016/06/web1_web0621DukesDiploma02.jpgNathaniel Dukes and his wife, Latausha, pose for a photo Wednesday at The Hope Academy after Nathaniel Dukes earned his high school diploma through the Project HYPE program.