Carlisle is a busy Cavalier 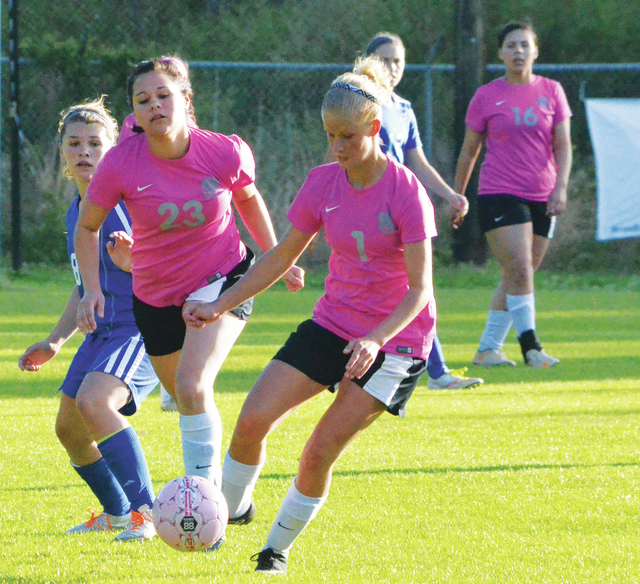 Carlisle is a soon-to-be junior at Callaway High, and as if the demands of being a high-school student aren’t enough, she’s also a multi-sport athlete.

Carlisle played two sports as a freshman when she was a standout on the softball and soccer teams, and she added another sport to the schedule during her sophomore year when she began playing basketball.

With a new school year a little more than a month away, Carlisle once again plans on being a three-sport athlete, and she’s been spending the summer getting ready for those seasons.

Last week, Carlisle participated in summer workouts with the basketball, softball and soccer teams, and she also participated in a seven-on-seven soccer league on Tuesday night at Callaway High.

During a break in the action on Tuesday, after Carlisle had just played two 40-minute games, she detailed her hectic week.

Carlisle has no complaints, though.

She enjoys all three sports, and she looks forward to the Tuesday nights when she can join her teammates for seven-on-seven league action.

“Any chance I have to play soccer, I love to come out and play,” Carlisle said. “We’re just trying to get better.”

Playing two sports as a freshman was enough of a challenge, but Carlisle decided to up the ante when she joined the basketball team for the 2015-2016 season, and she was a key bench player who provided an offensive spark when she was in the game.

Carlisle helped Callaway finish second in Region 5-AAA in the regular season before placing third in the region tournament to qualify for state.

“That was my first time playing (basketball) in high school, but I played in middle school,” Carlisle said. “It was fun.”

During the fall, Carlisle was an exceptional outfielder for the softball team, which finished third in the region tournament to advance to state.

Then during the spring, Carlisle helped Callaway’s soccer team enjoy a fine season that ended with a hard-fought loss in the state tournament.

Through it all, Carlisle didn’t let her academics slide.

She maintained all As and Bs, and she said it was just a matter of staying disciplined.

“It was really no big deal,” she said. “A few times I thought it was kind of hard to keep my grades up, but I just had to keep my head into it.”

As Carlisle looks forward to a new school year, first up will be softball season, which gets under way in August.

Carlisle will be heading into her third season as a starter, and she’ll be taking on a new role this year.

After playing the outfield the past two seasons, Carlisle will be moving to the infield this fall to fill the hole left by Keshonna Terrell.

“This year, (head coach Ashley Summerlin) moved me to shortstop, and I’m used to being in center field,” Carlisle said. “This will be my first year. I’m ready.”