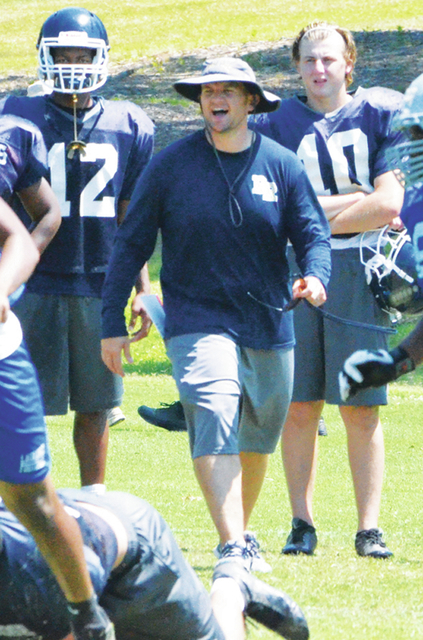 LAGRANGE – It was good to be back home.

During a recent 11-on-11 football camp that was hosted by LaGrange High, one of the participating teams was River Ridge High from Woodstock.

River Ridge’s head coach is someone with some local ties.

Tyler Wynn, a former quarterback at Troup High who helped lead the team to the state quarterfinals as a senior in 2003, is heading into his second season as River Ridge’s head coach.

For Wynn, one of the advantages of being back in LaGrange for the team camp was the chance to frequent one of his favorite eating places.

“You get some good competition away from the teams that we normally play,” Wynn said. “And it was a good chance for me to come home and get some Charlie Joseph’s.”

After serving as an assistant coach in baseball and football for several years, Wynn was tabbed to take over as head coach for the 2015 season.

Wynn knew it was going to be a challenge.

The Knights began the season by losing their first nine games, and they avoided a winless season by beating Riverwood 34-21 in the season finale.

“Last year was a growing year for all of us,” Wynn said. “They’re great kids. Maybe not the best athletes, but we’re getting there.”

Wynn was a two-sport standout at Troup.

He was an all-state player in baseball and football, and he had some memorable moments in both sports.

As a senior in football, he helped the Tigers post a 10-3 record and reach the third round of the state playoffs, and he was also on the team that made it to the final four in 2001.

Troup began that 2003 football season by beating LaGrange, and the Grangers followed that up by winning 29 straight games, making that season-opening win all the more impressive for Wynn and his teammates.

After high school, Wynn went on excel in two sports at Carson-Newman University in Tennessee.

He was a quarterback on the football team, and he was an outfielder on the baseball team.

Wynn, who has two children with his wife Brittany, began coaching at River Ridge in 2010 after a brief stint at Troup, and he was the offensive coordinator before making the move to head coach.

One of Wynn’s biggest influences in coaching is his father James Wynn, himself a veteran of the coaching business.

Wynn is retired from teaching now, but he’s always ready to lend his son a hand.

“Any chance he gets to come out, he does,” Tyler Wynn said. “I told him we were coming to town (for the camp), and he said, I’ll be there.”

River Ridge will open its season on Aug. 19 against Woodland-Cartersville.

Tyler Wynn, a Troup High graduate, keeps an eye on things during an 11-on-11 football camp this summer. Wynn is heading into his second season as the head coach at River Ridge. Kevin Eckleberry | Daily News

http://lagrangenews.com/wp-content/uploads/sites/37/2016/07/web1_wynn.jpgTyler Wynn, a Troup High graduate, keeps an eye on things during an 11-on-11 football camp this summer. Wynn is heading into his second season as the head coach at River Ridge. Kevin Eckleberry | Daily News