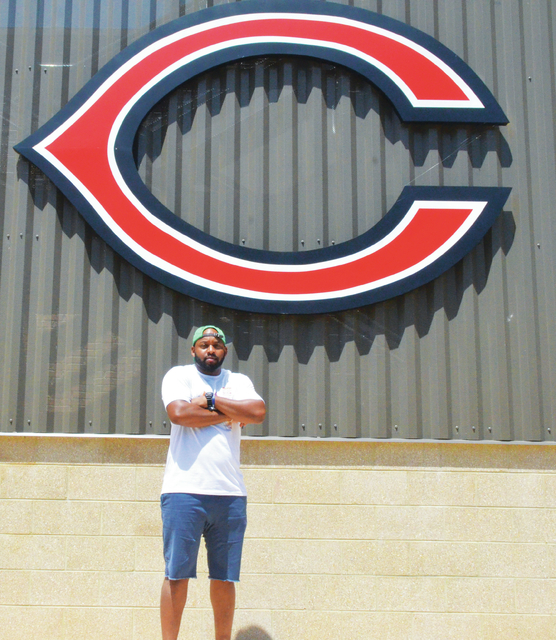 HOGANSVILLE – It was supposed to be a small, intimate gathering of a few dozen high-school students.

At least that’s the understanding that Callaway High graduate Quay Boddie, then a freshman at Shorter University, had as he prepared to speak at a Fellowship of Christian Athletes function.

“My freshman year at Shorter, 2009, I started speaking through FCA,” Boddie said. “I was nervous as heck first of all. I was under the impression that it was only going to be 30 people. It ended up being 800 people. I told God, you get me out of this one, I’ll do whatever it is you want me to do as far as pouring into the community.”

Everything went smoothly, and Boddie discovered that he had a passion and a joy for sharing words of encouragement with others.

Boddie continued to speak throughout college, and he soon decided that he wanted to share his thoughts through the written word as well.

So Boddie began writing, and a book that was titled “Old Soul 22” was released in 2014, and a year later he had another book published called “I Am Somebody.”

He’s a speaker, an author, and someone who is overjoyed to be doing what he loves and hopefully making a positive difference in the lives of people he interacts with.

“It’s impact,” Boddie said, when describing what he is trying to accomplish. “I asked for somebody to come into my path every day, somebody I can impact. That’s what matters. It’s not about money. It’s not about let me be seen. It’s not about look at what he’s doing. It’s about making an impact in somebody’s life, showing them a good, kind-hearted, humble, God-fearing guy, that has come from struggles, but is trying to do it the right way. If I can do it, then you can do it, too.”

Boddie’s story began when he was a young man being raised by his grandmother, and he eventually made his way to Callaway High where he was a standout on the baseball and football teams.

Boddie was so successful on the football field that he was offered an athletic scholarship to Shorter College, and he gladly accepted.

Boddie was active in the FCA, and it was through that organization that the speaking engagement at a local school in Rome was arranged.

“Next thing you know, the whole school comes in there,” Boddie said. “It was Armuchee High School, and there was every bit of 800 kids in the auditorium.”

After that, speaking became a regular part of Boddie’s routine at Shorter, and in an indication of how well things went at Armuchee, he was invited back twice more to speak.

Soon enough, Boddie was bitten by the writing bug.

He was already an avid writer, sending out words of encouragement to people through electronic means, so he figured why not take the next step?

“In late 2010, I started sending out text messages every day. Text messages went to email,” he said. “After that, now you’ve got to write a book. I’m like God, you’re crazy.”

While the idea of writing a book while he was still in college may have indeed seemed crazy at times, he marched forward, and began working on “Old Soul 22.”

The book, as described on the back cover, is made up of “compilations of encouragement”, and it was released through Tate Publishing, which is a giant in the world of Christian literature.

“I sent my manuscript from “Old Soul 22”, to Tate Publishing,” Boddie said. “They do a lot of work with T.D. Jakes, and Joel Osteen.”

Boddie said he wasn’t expecting anything to come from it, but “maybe two or three days later, they were contacting me. And that was the only company I sent my book to. It takes people years, literally years, and they’re sending it to multiple publishers. On my first try, it was like, we love this.”

Boddie said the title was a combination of his age, and his philosophy on life.

“I was 22 when I wrote it, and I’ve got an old soul,” Boddie said. “I like old music. And I just come from old principles and teachings. Everything from respect, to how to treat a lady. So that’s why I named the title Old Soul, and I wrote it when I was 22.”

Not content to rest on his laurels, Boddie went back to work and wrote another book, and that became “I am Somebody.”

“It’s similar to “Old Soul 22.” “I am Somebody” reminds you that no matter what people say, no matter how many times people try to push you down and say that you’re nothing, that you’ll never be anything, that even if you’re going through trials and tribulations right now, that you are somebody,” Boddie said. “I am worthy. I will be successful. I’m victorious. That’s what “I am Somebody” symbolizes.”

Because of his success, Boddie was invited to participate in a book festival in California that featured writers from across the country.

The trip, Boddie said, was an overwhelming success.

“I got out there, and I made some wonderful connections,” he said. “And just to see California, I was in Oakland, Berkley and San Francisco. The whole week, I was back and forth between the three, the whole bay area. I didn’t want to leave. And the people are positive. I had to share a booth with an author so that was pretty fun. I learned a lot. It was a successful trip.”

Boddie said the lessons he learned on the football field have served him well.

In football, it’s all about competition, and striving to be your best, and he has applied those lessons to his life off the field.

“You come out on a college level, and I had coaches and mentors that told me, you started at your high school, or you were a star, there are guys there that are going to be bigger and faster,” Boddie said. “So you’ve got to compete, and you’ve got to translate that to life. There are people that are doing the same thing you’re doing.”

As for what’s next, Boddie said he’s “always writing,” and that there is something else in the works.

“I’m working on a huge project, or it’s huge in my mind,” Boddie said. “How I look at things, it only gets better and better. There’s no taking a step back. So, I’m working on another book.”

Boddie will also continue to speak, and whether it’s a large gathering of hundreds of people or just a few students, he’ll approach the assignment with the same level of enthusiasm.

“I probably have eight, nine engagements in the next couple of months,” Boddie said. “Some of them are smaller. But it’s not about the size of the event. I enjoy it, making an impact. It all goes back to that word, impact.”

Quay Boddie stands on the practice field at Callaway High where he spent a lot of time during his high-school days. Boddie, a Shorter College graduate, has published two books and is a popular speaker. Kevin Eckleberry | Daily News

http://lagrangenews.com/wp-content/uploads/sites/37/2016/07/web1_Boddie1.jpgQuay Boddie stands on the practice field at Callaway High where he spent a lot of time during his high-school days. Boddie, a Shorter College graduate, has published two books and is a popular speaker. Kevin Eckleberry | Daily News

Quay Boddie said he has put the lessons he learned playing football at Callaway High and Shorter College to good use. Kevin Eckleberry | Daily News

http://lagrangenews.com/wp-content/uploads/sites/37/2016/07/web1_Boddie2.jpgQuay Boddie said he has put the lessons he learned playing football at Callaway High and Shorter College to good use. Kevin Eckleberry | Daily News