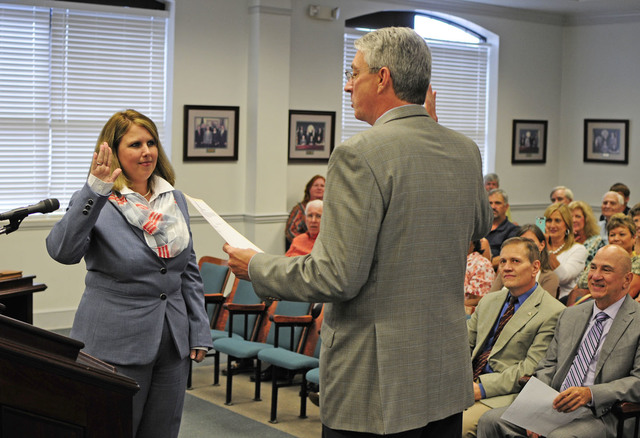 LaGRANGE — Meg Kelsey can drop the interim designation from her title after City Council officially named her the new city manager on Tuesday.

“I am truly honored and humbled to be your next city manager,” Kelsey said after council members voted to make the move official during their afternoon meeting. “I follow in the footsteps of great managers who left their mark on this community, none greater than my boss, Tom Hall. … (He) had a knack for guiding our city to consistently greater height. He increasingly trusted me with the opportunities and responsibilities to learn this business inside and out.”

Kelsey thanked the late John Bell, longtime finance director, who also taught her the ins and outs of city finances and operations. She also credited her father, who served as a city manager elsewhere for more than 40 years and from whom she learned by watching him work. She thanked her mother for teaching her caring and compassion, as well as thanking her husband, daughter and the rest of her family for their encouragement.

The Council chambers was packed with supporters Tuesday, including Kelsey’s family, city staff, Troup County officials and representatives from the Georgia Municipal Association. GMA president and Dallas, Georgia, Mayor Boyd Austin attended the meeting for the event and said he was glad to see the city promote from within. He shared his confidence in Kelsey, noting her background as the daughter of a longtime city manager and student of Hall.

“I am glad to have so many family, friends and staff here tonight,” Kelsey said. “… Above all, I’m excited about what the future holds for our greatest little city. The role of city manager is a great responsibility, and one I don’t take lightly. … I will continue to work hard every day for the betterment of our city and all those who live, work and visit here.”

All council members took turns congratulating Kelsey and sharing their enthusiasm for her impending tenure.

Councilman Willie Edmondson said the city was “on the cutting edge” by hiring its first female city manager. He also expressed his confidence in Kelsey based on her work over the years.

Councilman LeGree McCamey said he had the “utmost confidence” in Kelsey’s skills. He said during the search process for a new manager, it became clear that Kelsey was the best-suited applicant, adding how she has “stepped into (her) own shoes” since being named acting and then interim city manager.

“We knew Meg was good, we knew she was great, but we didn’t know how great until we started looking at all the other applicants and she just stood out,” he said. “I think we made the right choice.”

Mayor Jim Thornton at the top of the meeting noted that in the 66 year history of the city having a manager, there had been only four prior to Kelsey. The average tenure was 16.5 years, but Hall served the longest.

Kelsey earned a bachelor’s degree in public administration and political science from Georgia College and State University in Milledgeville in 1994, and in 1996 earned a master’s in local government management from the University of Georgia in Athens.

Meg Kelsey is sworn in Tuesday as LaGrange’s city manager by City Attorney Jeff Todd. Kelsey, who has been with the city since 1996, has served as deputy city manager and became interim city manager after previous manager Tom Hall suddenly passed away in February.

http://lagrangenews.com/wp-content/uploads/sites/37/2016/07/web1_web0713MegKelseySwornIn.jpgMeg Kelsey is sworn in Tuesday as LaGrange’s city manager by City Attorney Jeff Todd. Kelsey, who has been with the city since 1996, has served as deputy city manager and became interim city manager after previous manager Tom Hall suddenly passed away in February.