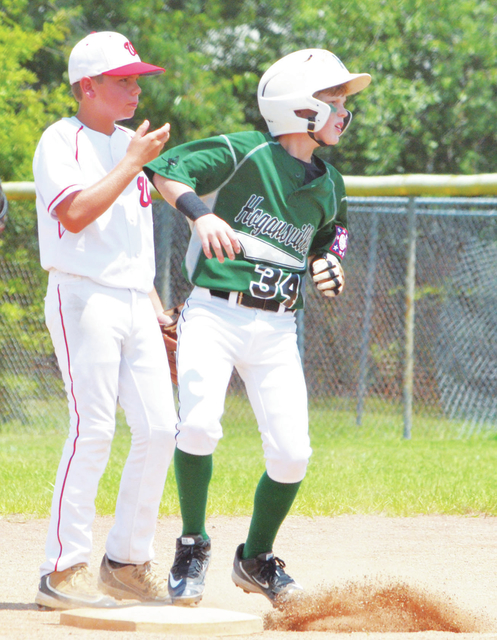 The Hogansville all-stars came into the summer season focused on winning a state championship, and on a sweltering Sunday afternoon in Macon, they made it happen.

Facing Wrens in the Dixie Youth Baseball 11-12-year-old state-title game on Sunday, Hogansville pushed a run across in the bottom of the sixth inning to pull off a thrilling 10-9 victory.

Hogansville had an 8-0 lead after the first inning, but Wrens came all the way back and tied it at 9-9 with four runs in the top of the sixth inning.

Hogansville, needing one run in the bottom of the sixth to win the game and the championship, had the bases loaded and one out when Ben Alford stepped to the plate.

Alford was called upon to bunt, he got it down, and Daniel Martin came home with the winning run, and the celebration was on.

A year ago this time, Hogansville made it to the state-championship game, only to fall short against Albany.

This summer, Hogansville wasn’t going to be denied.

“I’m just super proud of these guys, and all the hard work they put in all summer,” Hogansville head coach Scott Thompson said. “We came up short last year. We knew what it took to get it done this year. Our guys did a phenomenal job today.”

After Hogansville sent 11 batters to the plate in the first inning, it was looking like it could be headed for a run-rule victory.

A determined Wrens team kept coming, though, and it fought all the way back and tied it, forcing Hogansville to win it with the sixth-inning rally.

“We had to fight,” Thompson said. “Wrens is a great team. They didn’t give up. They’re down 8-0. They scratched and clawed. That says a lot about them as well.”

Martin and Zack Thompson led off the bottom of the sixth by reaching on back-to-back errors, and Hogansville had runners on first and second with no outs.

The Wrens coach then made the unconventional move of intentionally walking Hogansville slugger Nate Lee to load the bases, putting the winning run on third with no outs.

After a pop-out, Hogansville still had the bases full, and there was one out when Alford made his way to the batter’s box.

Thompson felt if Alford got the bunt down, Wrens would have almost no chance to get the out at the plate.

“On that thick grass, it was going to be hard for them to field it,” Thompson said. “And Daniel’s fast anyway. He’s breaking when the ball is put in play. Unless you bunt it right to the pitcher, you’re going to score on that play.”

“He gave me the sign, so I was pretty confident,” Alford said. “I just had to get it down.”

Alford’s bunt was perfect, and Martin scored easily, and the championship belonged to Hogansville.

As Alford crossed first base, he was picked up by his father and Hogansville coach Terry Alford, and moments later Hogansville’s players jumped on top of each other for a celebratory dogpile.

“I can’t even remember what happened,” Ben Alford said. “I threw my helmet and threw my glove. I hope I can find them.”

Chase Williams got the complete-game victory for Hogansville.

It was a struggle at times, but the right-handed Williams hung in there and made the pitches when he had to, and he was backed up by a defense that was, as has been the case throughout the summer, superb.

Williams also pitched in Friday’s game, and he threw a one-hitter in a 10-0 win over Albany.

“Today, he had to work a little bit harder,” Thompson said. “But he shows you that he’s got it in him, to really dig deep, and he got the win. I’m super proud of him as well.”

In the top of the first, Hogansville turned a double play to get out of the inning without any runs scoring.

Then in the bottom of the inning, Hogansville exploded.

Williams got the rally started with a base hit, and Martin followed with a double over the third-base bag to bring him in, and Hogansville had the game’s first run.

After Zack Thompson reached on an error and Lee walked, Tre Mosley’s bases-loaded single brought in a run to make it 2-0.

Karvelas and Hartley came around to score on wild pitches, and Hogansville exited the inning with an 8-0 lead.

Wrens scored four runs in the third inning to cut its deficit to 8-4, and it scored another run in the fourth inning to get within three.

Hogansville added an insurance run in the bottom of the fourth.

With two outs, Martin kept the inning alive with a double.

Thompson followed with an infield single, and Martin scored when the throw to first went awry, and the lead was 9-5.

After a scoreless fifth inning, Wrens knew it it needed to score at least four runs in the top of the sixth to keep the game going.

Wrens did just that, with Landon Griswell’s two-out single driving in the tying run.

With the bases loaded, Williams got the final out of the inning on a groundout, and it remained a tie game, and Hogansville won it in the bottom of the inning.

SATURDAY’S GAME: Hogansville reached the championship game with a 13-7 victory on Saturday.

Nate Lee had a monster game for Hogansville that included a grand slam, a double, and six RBIs.

OF NOTE: For more photos from Sunday’s game, check out facebook.com/LDNsports

Hogansville’s Ben Alford gets a lift from his father and coach Terry Alford after getting a bunt down in the bottom of the sixth inning to win Sunday’s championship game. Kevin Eckleberry | Daily News

http://lagrangenews.com/wp-content/uploads/sites/37/2016/07/web1_hogansville.jpgHogansville’s Ben Alford gets a lift from his father and coach Terry Alford after getting a bunt down in the bottom of the sixth inning to win Sunday’s championship game. Kevin Eckleberry | Daily News

Brett Haynes, who had one of Hogansville’s RBI hits in an eight-run first inning, rounds second base. Kevin Eckleberry | Daily News

http://lagrangenews.com/wp-content/uploads/sites/37/2016/07/web1_hogansville16.jpgBrett Haynes, who had one of Hogansville’s RBI hits in an eight-run first inning, rounds second base. Kevin Eckleberry | Daily News

Hogansville’s Zack Thompson makes his way to second base during the first inning of Sunday’s game. Kevin Eckleberry | Daily News

http://lagrangenews.com/wp-content/uploads/sites/37/2016/07/web1_hogansville12.jpgHogansville’s Zack Thompson makes his way to second base during the first inning of Sunday’s game. Kevin Eckleberry | Daily News