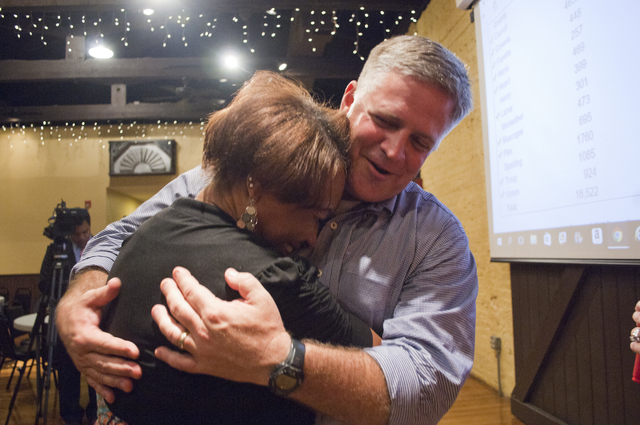 WEST POINT — A small-town mayor scored an unlikely victory Tuesday in the race to become the Republican nominee for Georgia’s 3rd Congressional District.

“To think that we came from really the smallest part of the district, with the least resources, and the least name recognition, to get to this point says an awful lot about about y’all,” Ferguson told the crowd. “It says a lot about the supporters, the volunteers and the work that was done.”

Westmoreland also addressed the crowd, telling them Ferguson was “going to do a job that’s going to make you very, very proud.”

The congressman also made a slight jab at Ferguson’s opponent, Crane, who had accused Ferguson of being too cozy with big businesses, including Kia Motors Manufacturing Georgia.

“As I was coming down (Interstate) 85, I looked to the right and saw Kia, and I saw all those cars in that lot, and I thought to myself, ‘Would those folks in there, making those cars, call this corporate welfare?’” he said. “No, they would call that economic development. I know that Drew is going to carry that on — what we’ve tried to do, and that’s bring jobs to Georgia’s 3rd Congressional District, because it is a great place for people to live, work and to play.”

The comment drew a strong applause from Ferguson’s supporters.

Meanwhile in Newnan, Crane gathered with supporters at Orchard’s Hill Church on Gordon Road. In a concession speech to supporters, Crane hinted at a future run for office.

“God’s got bigger things for us. The next race won’t be in November. We just don’t know when it will be, do we?” Crane said. “Georgia could use a new governor, couldn’t they?” Crane said with a laugh, to loud applause.

Crane asked if state Sen. Josh McKoon, a Columbus Republican and Crane supporter, was still in the room.

“That’s who I was thinking about,” Crane said. “All right, I’m just teasing.”

Crane said he was heavy hearted, but in the future, “We’re going to win. It may not be me, it may be somebody else in this room. But we’re going to win because we’re an idea, an idea that comes directly from the heart of God. He set us in the garden, and he set us free and he said choose.”

— Newnan Times-Herald reporter Sarah Faye contributed to this article as part of a reporting collaboration between the Times-Herald and the Daily News.

This story was updated Wednesday morning. The original Tuesday evening post is below.

Ferguson garnered 22,354 votes and Crane had 19,115 with all but Henry County reporting as of 10:40 p.m. Results are unofficial until certified by the Georgia Secretary of State’s office.

Ferguson celebrated with supporters at an election night party in his home town of West Point. He was flanked by supporters, including incumbent Congressman Lynn Westmoreland, who is not seeking re-election.

The candidate thanked supporters and his family, and said he would continue to work toward earning votes in the general election.

Read LaGrange Daily News online and in print on Wednesday for a full recap of the night and more information.

Click here to see a video of Ferguson, along with Westmoreland, address supporter.