Music returns to West Side school 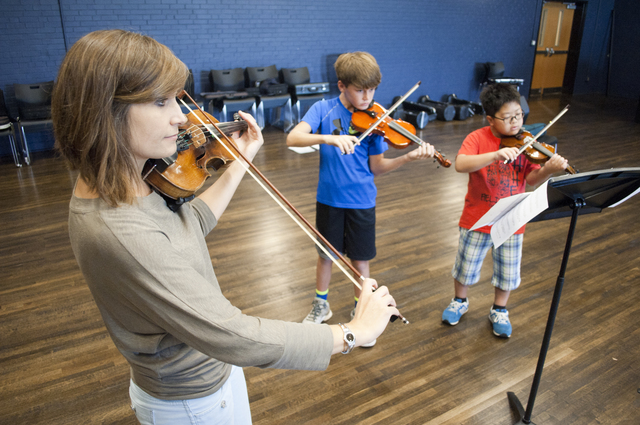 LaGRANGE — The sounds of youngsters learning to play violins and cellos are again ringing through the halls of West Side School this week.

About 80 students from age 5 to high school are taking part in the LaGrange Symphony Orchestra’s Strings Attached and Ovation music camps, held at the former arts-focused magnet school, which was recently renovated and now a part of the LaGrange College campus.

In small groups with individual teachers, the students are learning strings at various levels — from beginning to more advanced.

Raylene Carter, the LSO’s executive director, said the twin camps are aimed at building a strong musical foundation for kids, and encouraging them to seek out music for the rest of their lives.

“Our mission is to enrich our community through music, and one of the ways we do that is through our youth outreach program,” she said as she sat in the main hallway of West Side. “It takes a village, but we’re trying to do it.”

Down the hall from Carter, Janet Powell, a strings teacher, stood in a small room with small children, and the only thing brighter than the new fluorescent lights was the looks on the faces of about a dozen 5 and 6 year olds.

“OK, now, rest position,” she said as she clung her violin to her stomach, showing the children how to hold their tiny instruments when not in use.

A few doors down the hallway, 6-year-old Whit Hammond fidgeted in his seat as his cello instructor, Katie Truix, gave some advice about the song they were working on.

Across the hall, Sam Lee, another music instructor, taught a room of kids about opera and world-famous tenor Luciano Pavarotti.

Not far away, in another West Side building, a few dozen elementary schoolers took a break from music to gulp down yogurt and fruit in the now-converted former gymnasium of West Side. A sweet smell and children’s voices filled the room. Some volunteers that helped teach the youngsters took a break, as well.

Standing in the hallway outside a room where the kids socialized, a slender teenager with shoulder-length brown hair and red high-top Converses took respite from the noisy elementary schoolers. His name is Bryson Smith, he explained as he stood in the hallway. He chatted with a soft-spoken and well-mannered high school freshman named Libby Criswell. The two are cellists, they explained, and volunteered to help during the camp.

Celeste Myall, director of the LaGrange Youth Symphony Orchestra, said she’s glad to have teenage volunteers at the camp.

“It’s good for them (the students) to see cool young people. Our teachers are cool, but they’re not cool like Libby and Bryson. We also have a violinist helping, too. They relate to that age, they’re more cool than all of us old people,” Myall said with a laugh.

Smith, 16, said he was happy to spend the waning days of his summer volunteering.

“I like it a lot because it gives people that very necessary introduction,” he said. “That when they come into private lessons, they kind of already have an idea of what’s happening, and they can just jump right in. They don’t get discouraged.”

Myall, Carter and the rest of the instructors are hoping the kids don’t get discouraged, too.

“The younger you can get a child involved in it, and love it, the more likely they are to be a lifelong patron of the arts,” said Carter, the LSO’s executive director. “Even if they don’t decide to become a professional musician, it can still make a difference.”

The Ovation and Strings Attached camps will have a recital Friday at Callaway Auditorium at 11 a.m. The event is free and open to the public.

For more information on the LaGrange Youth Symphony Orchestra, and any of its outreach programs, visit www.lagrangesymphony.org or call 706-882-0062.

Janet Powell, right, a music teacher, walks students down a hallway at the West Side building of LaGrange College on Tuesday during the LaGrange Symphony Orchestra’s Strings Attached Camp.

http://lagrangenews.com/wp-content/uploads/sites/37/2016/07/web1_LSOCamp03WEB.jpgJanet Powell, right, a music teacher, walks students down a hallway at the West Side building of LaGrange College on Tuesday during the LaGrange Symphony Orchestra’s Strings Attached Camp.

Kallie Hammond, left, a violin teacher, gives lessons to students, including Kaden Kinney, center, and Caleb Hwang, both 10, on Tuesday during the LaGrange Symphony Orchestra’s Strings Attached and Ovation camps this week. The camp is hosted at the West Side building of LaGrange College.

http://lagrangenews.com/wp-content/uploads/sites/37/2016/07/web1_LSOCamp01WEB.jpgKallie Hammond, left, a violin teacher, gives lessons to students, including Kaden Kinney, center, and Caleb Hwang, both 10, on Tuesday during the LaGrange Symphony Orchestra’s Strings Attached and Ovation camps this week. The camp is hosted at the West Side building of LaGrange College.