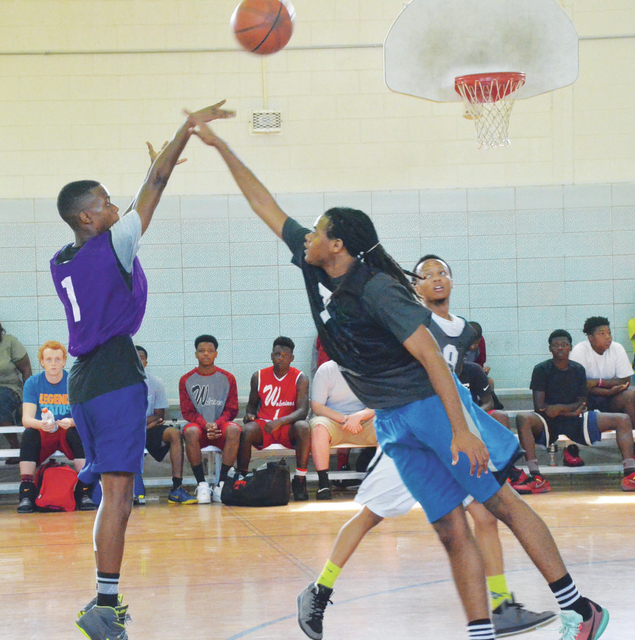 LAGRANGE – Hayley Holliday doesn’t want to be treated any differently.

Each Saturday at the Griggs Recreation Center, dozens of players get together to compete in a basketball league that lasts throughout the summer.

The league members are almost all men, but there is one exception.

Holliday, who’ll be a sophomore on the Callaway High basketball team next season, is the only female participant in the league, and she’s fine with that.

“It’s been fun,” Holliday said. “I’m the only girl, so it makes me tougher when I play with just other girls.”

While Holliday’s gender may be different than everyone else out there on Saturday mornings, she shares one thing in common with the other players, a desire to compete and better herself.

The league was created by current Callaway High assistant basketball coach Sam Cotton, and each summer since 2012 the players have gathered at the Griggs Center to run the court.

The players are divided into teams, and they end up playing a dozen games each Saturday, and the top teams end up facing off for the championship at the end of the day.

When the final game has been played, the winning team gets to pose with the championship belt for a photo that will go in Cotton’s scrapbook.

Many of the players have been with the league since the beginning, including former Callaway Cavalier and current Columbus State University student Daniel Heard, who enjoys re-connecting with his friends each summer.

“It helps to get your game better, and just come back and remember your old friends,” Heard said.

As for the championship belt, that’s something that Heard and the other players compete fiercely for.

“It’s all about winning the championship,” Heard said.

League play begins at the start of the summer, and it continues into August.

For 10 Saturdays during the summer, the players come out to the Griggs Center, and they get their fill of basketball.

“We give them 12 games (each Saturday),” Cotton said. “There aren’t many places you’ll play where you get 12 games in.”

The youngest player is in the sixth grade, and there are also a handful of adults who come out and test themselves.

For all of them, Cotton believes spending so much time on the court will pay off.

“That’s what I want this to be about. Compete, gentlemen, compete,” Cotton said. “If you’re 0-11, did you learn something, and did you get better. The more you play, the better you’ll be.”

There are no referees.

It’s up to the players to make the calls and police themselves, and Cotton said they do a great job of that.

“I try to emphasize that,” Cotton said. “Let them make the calls, and respect the calls. They do that.”

From Day 1, Cotton has been impressed with the dedication of the players, who show up each Saturday on time and ready to play.

“They’ve been disciplined kids,” Cotton said. “If I say be here at 9, they’re here before 9, ready to go. They listen to details.”

His hope is that the league will help the young players not only learn more about the game, but develop other skills as well.

He wants it to be a positive, learning experience for everyone involved.

“Anybody who comes in that door, it’s about discipline, about speaking, about life skills,” Cotton said. “That’s the most important thing.”

Cotton said some members of the community, including Callaway High boys’ coach Terry Hayes, have been there during the summer to help out.

“I’ve got so many within the community that comes over here, that volunteers their time,” Cotton said.

Cotton believes it’s important for the young players to see adults who came from similar backgrounds and have gone on to succeed in life.

Cotton is always gratified to see people he coached at LaGrange High or Callaway come spend time with the players.

“All of them keep coming back,” Cotton said. “I’ve got some that played for me back when I coached at LaGrange High. Everybody comes back, that’s what I like about it. Let them know what you’ve done. Let them see. That’s who we want to associate ourselves with.”

Sam Cotton talks to the players at the close of league play on Saturday at the Griggs Recreation Center. Kevin Eckleberry | Daily News

http://lagrangenews.com/wp-content/uploads/sites/37/2016/07/web1_league2.jpgSam Cotton talks to the players at the close of league play on Saturday at the Griggs Recreation Center. Kevin Eckleberry | Daily News

Jackson savored his time as a professional basketball player