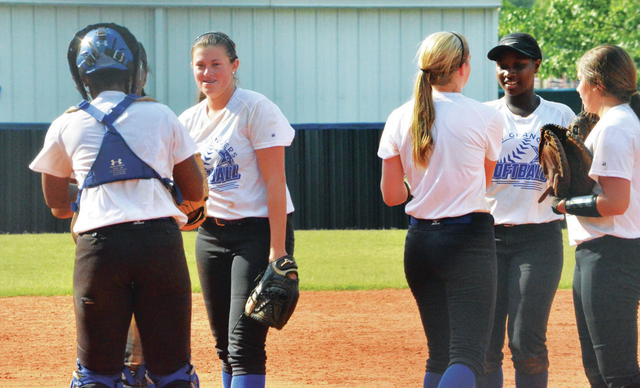 A new high-school softball season gets under way today, with Callaway hosting Troup, and LaGrange hitting the road to take on Newnan.

Those teams have had a little more than one week of preseason practice, and now it’s time to jump into a new season.

Adding to the sense of urgency, LaGrange and Troup will play their region openers on Thursday, while Callaway doesn’t begin its region schedule until Aug. 30.

For Troup, today will be the start of a busy stretch.

Between now and Aug. 20, Troup will play 10 games, and eight of them will be against non-region foes.

Mason Brackett, Troup’s first-year head coach, said those games will be valuable as he looks to figure out what the most productive lineup will be.

Early in the season, Brackett said there will be a lot of mixing and matching going on.

“That’s what we’ve told them,” Brackett said. “We still have several positions that are wide open. We told them what to expect, and to be open and receptive.”

The pitcher’s spot is one of those positions that is unsettled.

“We’ve got four pitchers who we’re looking at,” Brackett said. “We’re hoping over the next couple of weeks, at least two of them will be able to distance themselves and prove to most valuable as a pitcher.”

While Troup does have some newcomers, it also has a handful of talented veterans including Maddie Weathers, Madison McCartney, Kayla Lane, Abby Taylor, Andrea Nix and Kinley Stanford, all of whom helped lead the team to a third-place finish in Region 5-AAAA last season.

Also getting started today is LaGrange, which will share Region 5-AAAA with Troup this season.

LaGrange played a preseason game on Friday at Brookstone, and that came one day after an intra-squad game where the junior-varsity players took on the varsity players.

“Everybody got an opportunity to play (on Friday),” said Gabby Heath, LaGrange’s first-year head coach. “We really wanted to see what we had in a game-type situation. We practiced, but they haven’t had the nerves of being in a real game.”

As for the intra-squad game, Heath said that was enjoyable for the players.

“That was a good experience, especially for our JV playing against good competition,” Heath said.

As LaGrange gets the season started, Heath will be relying on some of the team’s veterans including Shaq Sutton, McLain Skinner, Destiny Fitzpatrick and Lauren Kuerzi.

Heath also said the team has received a lift from the infusion of some players who are new to the sport.

“We’ve had a lot of new athletes come in, and while they don’t know the game, they’re extremely coachable, and they give us maximum effort every time they’re out here, and make adjustments,” Heath said.

The Callaway Lady Cavaliers played a preseason game at Norcross last week, and they were impressive offensively en route to a 15-10 win.

Callaway banged out 19 hits in the game.

Jenkins started and pitched five innings for Troup, and Rice was on the mound in the sixth inning when the game was called because of lightning.

Callaway lost five valuable seniors from last season’s team, and four of them will be playing college softball next spring.

Callaway will still have a significant veteran presence, though, with Kelly Carlisle, Talley, Rice, Jenkins and Bartlett returning.

In GISA softball, LaGrange Academy will open its season on Aug. 16 at Heritage.

The Troup Lady Tigers will open the season with a game at Callaway today. Kevin Eckleberry | Daily News

The LaGrange Lady Grangers will begin their season with a game at Newnan today. Kevin Eckleberry | Daily News