Perfect first half for Cavaliers 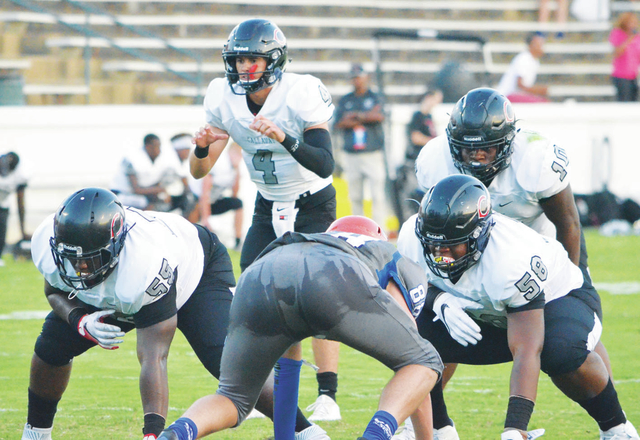 HOGANSVILLE – It’s five up, and five down for the Callaway Cavaliers.

When Callaway (5-0) beat Harris County 48-21 last week, it put the wraps on a perfect first half of the regular season.

Callaway is off this week, and it will return to the field on Oct. 7 for its Region 5-AA opener against Lamar County.

“I’m very proud of our kids for staying level, for working each week, preparing for one game at a time,” Callaway head coach Pete Wiggins said. “That’s what we’ve always tried to do, and prepare for the opponent that Friday night. That’s who we focus on. We’re not going to get ahead of ourselves.”

Only Handley managed to keep things interesting into the fourth quarter, and Callaway scored 21 unanswered points to win that one going away.

“Our kids have worked hard throughout the year,” Wiggins said. “We’ve had good practices. And they practice well. I think that’s a key to getting better. They want to win. They’re putting the time in it takes to get there.”

While the Cavaliers have the look of a complete team right now, there were plenty of question marks before the season began.

Callaway had a lot of key players to replace, including Cedric Maynard, who ran for nearly 2,500 yards on last year’s team that went 10-2.

The man who has replaced Maynard, DJ Atkins, is closing on 1,000 yards already, and he had more than 200 yards and three touchdowns in the Harris County game.

On a defense that was hit hard by graduation, some first-time starters have done a terrific job.

Among those players is sophomore linebacker Qua Hines, who led the team in tackles against Harris County, and junior Jonathan Leonard has return from an injury-riddled 2015 season to be leader on defense.

Three freshmen have even made major contributions to the team this season, including MJ Robertson, Cartavious Bigsby and Jacob Freeman.

In the season opener against LaGrange, Robertson returned an interception for a touchdown, and Bigsby has done a solid job at running back, and he scored a touchdown against Harris County.

“We knew we had a lot of holes to fill, and we still have a long way to go to get where we need to be,” Wiggins said. “I’m proud of the way the kids are focused, the way they practice. And they’re competitive. They want to play. There are kids fighting for playing time week to week. So our practices are high-tempo and physical, but that’s what it’s all about, and that’s how you get better.”

While Callaway has received major contributions from some new starters, the team is unbeaten due in large part to the presence of some talented seniors who are leading the way.

It’s one of the smaller senior classes Wiggins has had during his 12-year tenure, but while that group is limited in numbers, it’s presence is an enormous one.

Among that group is quarterback Dylan Johnson, who is having a superb season, as well as Braylon Sanders, one of the state’s most explosive wide receivers.

“Mike Freeman, Keegan Woods, Braylon Sanders, Dylan Johnson, Thomas Hodge, Jibrell Jackson, those kids have played a lot of football,” Wiggins said. “They’re great leaders on our team, and they’re also great leaders in the school. I’m really proud of those men for the leadership on the field. They lead verbally, but they also lead by example. Those guys practice hard, and they’re really an important ingredient on our football team.”

One of those seniors, Hodge, has gone from the offensive line, to linebacker, and now to the defensive line during his time as a Cavalier.

“Thomas Hodge, he’ll play where we need him to,” Wiggins said. “That makes a special football player. He’s one of the best offensive lineman that we have, and we need him on defense. He didn’t blink an eye. He plays on all of our special teams. He’s a physical player, but he’s a really smart player.”

Callaway will jump into its region schedule by playing a Lamar County (3-2) team that is part of a deep region.

Callaway and Heard County are both ranked in the top in Class AA, and Lamar County, Temple and Spencer have all received votes during the season.

Pete Wiggins’ Callaway Cavaliers have reached the midpoint of the regular season with a 5-0 record. Kevin Eckleberry | Daily News

http://lagrangenews.com/wp-content/uploads/sites/37/2016/09/web1_CHS1-5.jpgPete Wiggins’ Callaway Cavaliers have reached the midpoint of the regular season with a 5-0 record. Kevin Eckleberry | Daily News

With offensive linemen Jalen Moss, Keiondre Jones and fullback Jibrell Jackson around him, Callaway quarterback Dylan Johnson gets ready for the snap during a game this season. Callaway’s offense has been putting up big numbers this season. Kevin Eckleberry | Daily News

http://lagrangenews.com/wp-content/uploads/sites/37/2016/09/web1_CHS4-2.jpgWith offensive linemen Jalen Moss, Keiondre Jones and fullback Jibrell Jackson around him, Callaway quarterback Dylan Johnson gets ready for the snap during a game this season. Callaway’s offense has been putting up big numbers this season. Kevin Eckleberry | Daily News