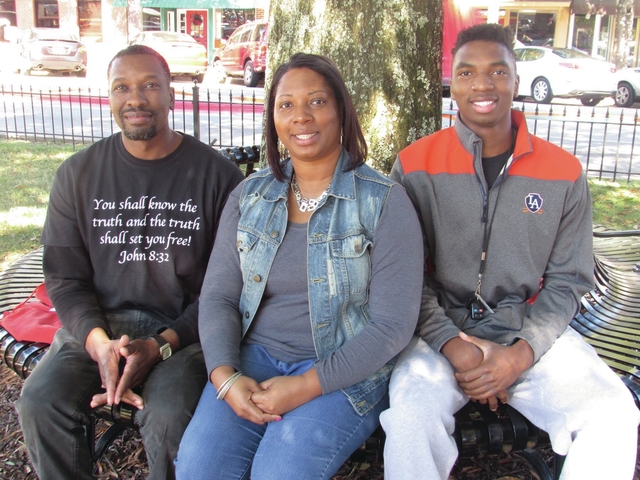 LaGRANGE — For more than two hours on Saturday, recovering drug addicts stood in LaFayette Square before dozens of people and gave gripping testimonies about their addictions, arrests and decisions to finally get clean.

They shared their stories of survival during the second annual Break Every Chain Recovery and Revival.

The event is meant to inspire other people to break free from addiction; whether it is to drugs and alcohol, pornography, financial spending, or others.

Lincoln Anderson, of LaGrange, was one of the first guest speakers to share his story with the crowd.

“I started out using marijuana and drinking,” he said. “Then I became addicted to crack cocaine and cocaine. I was using and selling it. Then I started robbing and stealing just to survive.”

Anderson was eventually arrested in Greenville, S.C. on Dec. 14, 1989 and charged with trafficking cocaine and possession of cocaine. He was estranged from most of his family and knew he needed to change.

“I remember lying on the jail floor and I hear my name called. I jumped up and asked the jailers if they called my name. They all said no. It was then I knew who was calling my name. It was God. From that point forward I studied my Bible every day,” Anderson said.

The former addict noticed a change in his life right away. His mom, whom Anderson had not spoken to in years, mysteriously turned up at the jail and posted his bail.

Anderson said he was facing 16 years behind bars for the charges against him. Instead, he only served seven days.

The man got clean, continued to read his Bible and began going to church where he met his wife, LaToya. He also started sharing his testimony with others.

“I was shocked when I heard it because I didn’t know him as that person. I had no clue,” LaToya stated. “But I saw how God saved him, built him into the man he was supposed to be and helped him become a family man.”

Anderson has been sober for almost 27 years, he said. He and LaToya have three children. The former addict continues to share his story with young children in the Troup County School System and with men at the Ark Refuge Ministries, which helps homeless men with addictions kick their habit and get back on their feet.

“People need to return to the people that love them the most,”Anderson said. “Everyone wants to feel that love. I received it from God when he saved me. Now I need to share it with others.”

“I am very proud of him,” said LaToya. “I think it’s important for people to share their testimony … When people recover from addiction they keep running away from it and don’t share their stories. But if you share your story, you can encourage someone else. People need support in order to conquer their addictions … “

Anderson admitted his recovery has not always been easy.

“There were times I wanted to give up,” he said. “We had job losses and financial hardships. I even had guys come back into my life and offer me drugs and money to come back to the streets. I refused. I stayed faithful to God’s word … I am determined to stay in God’s word and move forward …”

The event on Saturday included several guest speakers and live music performances from the 808 ministries.

Break Every Chain was started by local resident and former addict Kelly Camp. She held their first event in November 2015.

Anyone wanting more information on Break Every Chain may contact Camp at 706-416-6205 or visit the Facebook page at www.facebook.com/breakevery.chain.184.

‘It’s the way God intended me to be’