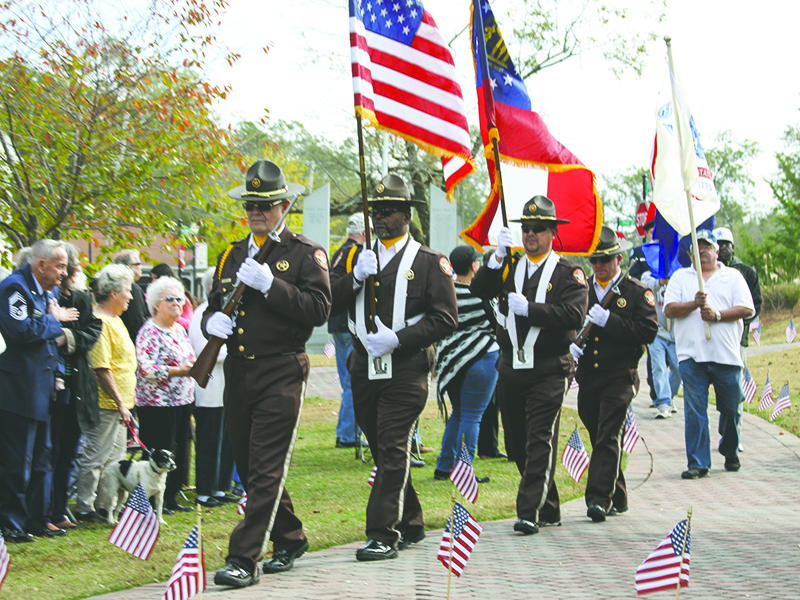 Police and service members carried flags representing the U.S., Georgia, and each of the military branches. (Alicia B. Hill | Daily News)

HOGANSVILLE – Residents here celebrated the service of their veterans at a ceremony Tuesday.

The crowd stood in reverent silence as Tracy Jones sang the national anthem for the Veterans’ Day service at Calvin Hipp Veterans Memorial Park that honored veterans, both living and dead, from the Hogansville area.

“We are joined in this community by a great number of veterans here today, and our city is better for their presence, and the city is honored by their service,” said Mayor Bill Stankiewicz at the ceremony.

Students from Hogansville Elementary School’s Honor Wave sang America the Beautiful for the crowd at the event, and LaGrange City Councilwoman Norma Tucker, a veteran, spoke on the importance of supporting each other and remembering that no one got where they are on their own.

“I’m honored to stand here because I know that it is not based on my efforts that have led me to this point in my life, but it’s the efforts of so many veterans and service members – both family members and friends who have cheered us all on and our community members – who have given us this freedom and the right to stand here today,” said Tucker, who retired from the Navy Reserve in December 2004. “… On Veteran’s Day, we salute the women and men who have proudly worn the uniform of the United States of America and the families who have served alongside them. It is often too easy for us to forget that for every service member – man or woman – who is somewhere serving in a uniform there are family members – mothers, fathers, sisters, brothers, and indeed children – who are left behind to wonder if their service member is safe or in harm’s way.”

After her military service, Tucker became the first black woman to serve on the LaGrange City Council. She is an active community member who besides her council duties also serves on several boards and in volunteer groups. Tucker’s son follows her example of service in the U.S. Navy.

“She truly exemplifies the person that we can all appreciate and respect in this country,” said Hogansville City Councilwoman Theresa Strickland in her introduction of Tucker. “She is humble, dedicated to service to her city, her community, surrounding communities in Georgia, and last but not least, her family.”

Former Hogansville mayor and U.S. Air Force Master Sargent Tommy Thrower was recognized for his military service and honored as the first Service Member of the Year for the city of Hogansville at the ceremony.