Give an ‘angel’ a chance at Christmas 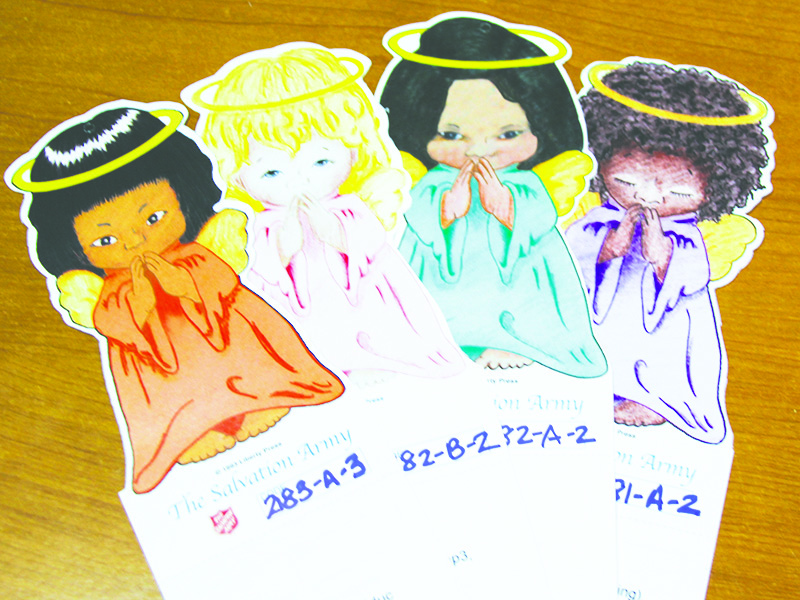 Information on local children' needs at Christmas is available on angels like these to be placed on trees throughout the community prior to the holiday. (Alicia Hill | Daily News)

LaGRANGE – Christmas music is already playing in stores, and parents are already readying themselves for the Black Friday rush, but what will become of children whose parents cannot afford to do much this holiday season?

This year, the LaGrange branch of the Salvation Army hopes to help make a merry Christmas possible for more than 540 children in the community who probably would have gone without if not for the program.  Children are selected for the Angel Tree based on their families’ need.

“Christmas is supposed to be a joyful time, and when you have parents and kids who – parents who first of all are stressed over being able to provide anything for their kids, and the kids who have all these hopes, who don’t understand that there’s situations that might make it difficult because they think Santa is bringing everything,” said Captain Monica Nickum of the Salvation Army. “It is exciting to know that you are making that possible, and I hope the donors know that too: That when they hand in their bags, they just made Christmas for a child.”

For the program, companies and members of the community select an “angel” to sponsor. The angel ornaments list wants and needs of children in the program – ranging from shoes to toys – and give people the chance to make Christmas a better time for that child. The gifts given in the program don’t just help the children though, they give parents the chance to let their children have a good Christmas, even while their family goes through hard times.

“Parents want to know that their children won’t feel forgotten or left out on Christmas,” said Patty Youngblood, president of the United Way of West Georgia, which partners with the Salvation Army on projects, including the Angel Tree. “… When someone is worried about how to put food on the table and how to have a good Christmas for their kids – parents will do anything for their kids.”

According to Youngblood, the Angel Tree prevents parents from having to choose between necessities like food and rent versus actually giving their children a Christmas like their friends have.  In some cases, it is even the boost that helps some families recover from a hard financial blow.

“I get excited when they don’t need us the next year because that means that we’ve gotten them through that crisis, and they’re on their feet again,” said Nickum.

In past years, the community has pulled together to make the program a huge success for the families involved, and organizers are hopeful for another great year this year.

“It makes for a very good Christmas,” said Nickum.  “Most of the kids get exactly what they asked for, along with clothing.  I know last year we did over 100 bikes, which was awesome to see. … It is all the generosity of the public and Toys for Tots.  They are our other partner in this.”

Toys for Tots did such a great job of collecting toys for local children last year that the Salvation Army was able to allow parents to pick out additional toys for their children who didn’t have an “angel.”

Nickum was quick to credit groups in the community with helping to make the program a success.  Several local businesses and churches have decided to adopt angels from the Angel Tree this year as a means of giving back to the community.

“We wanted to give back to the kids in the community and we just thought that was a good way to go about it,” said Erin Joyce, a customer service coordinator at Dan-Ric Homes. “It’s been nice too because not only have the employees gotten involved, but… some of our home owners have come out and gotten involved too.”

Joyce hopes that Dan-Ric Homes will be able to provide Christmas cheer for the 40 angels that they have adopted this year, but even people who don’t have money to sponsor an angel this year can make a difference by volunteering with the Salvation Army.

“We have great volunteers that come each year,” said Nickum. “… It’s really a very joyful occasion.  The whole packing up of them and sorting through them and giving them out is – it really makes Christmas for me.”

The Salvation Army began taking applications for the Angel Trees in October, so the regular deadline for sign up has already passed, but families who have experienced an emergency that would prevent them from providing a Christmas for their children since then can sign up through Dec. 10.