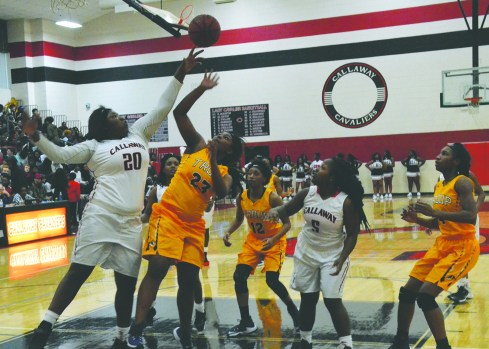 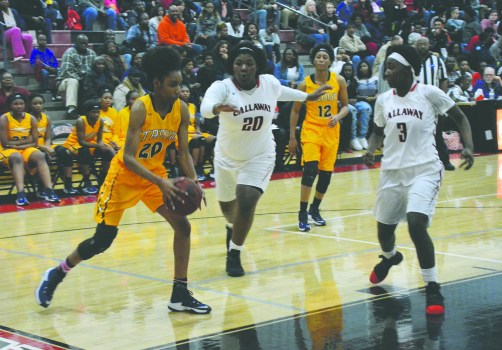 HOGANSVILLE – They didn’t let the game get away from them this time.

On Tuesday night, the Troup Lady Tigers had a seemingly comfortable lead in the fourth quarter, but they were limited to four points in the final eight minutes and Heard County rallied for a 41-40 win.

Two days later, Troup headed to the fourth quarter with the lead once again, but the outcome was different this time around.

Troup outscored Callaway 14-3 in the final quarter on the way to a 45-29 victory.

Troup has lost three games this season, and in two of those games, it was unable to hold a lead in the fourth quarter, so head coach Carla Thornton was pleased to see her players handle prosperity a little better this time.

“It happened against East Coweta, and Heard County,” Thornton said.  “We let the games slip away. We couldn’t let another game slip away. We had to finish what we started.”

For Callaway, it was all about an inability to get anything going offensively in the fourth quarter.

Callaway, which was within five at the close of the third period, didn’t make a shot from the field in the final quarter until there were 40 seconds left and the outcome had been determined.

For Troup, nine players scored, including Amber Gilbert, who led the way with nine points.

“Everybody scored except for one person,” Thornton said. “That’s always what we try to do. We try to build a team. You never want to be a one-player or two-player (team). We’re still building that.”

It was close early, with Troup taking a 10-8 lead after the first quarter.

Both teams struggled to put the ball in the basket in the second period, and nearly five minutes had expired by the time Shaqoya Gilbert scored to give Troup a 12-8 lead.

Callaway’s only points in the second period came when Cameron scored after pulling down an offensive rebound, and Troup was up 18-10 at the half.

Troup’s lead was nine in the third period when Beasley hit a 3-point bomb from long-range, and it was a 19-13 game.

Callaway got as close as two when Cameron scored with 2:20 left in the third period.

After Troup went back up by six, freshman Zorea Phillips made a 3-pointer, and it was a 27-24 game with 55 seconds left in the third period.

Troup scored the next four points on baskets by Fulton and Madden, and Cameron made two free throws with 10 seconds left in the third quarter to make it a 31-26 game, and that was the score as the final period began.

Amber Gilbert scored 10 seconds into the fourth quarter to put the Lady Tigers up by seven, and they poured it on from there, going on a 14-1 run before Haley Holliday scored.