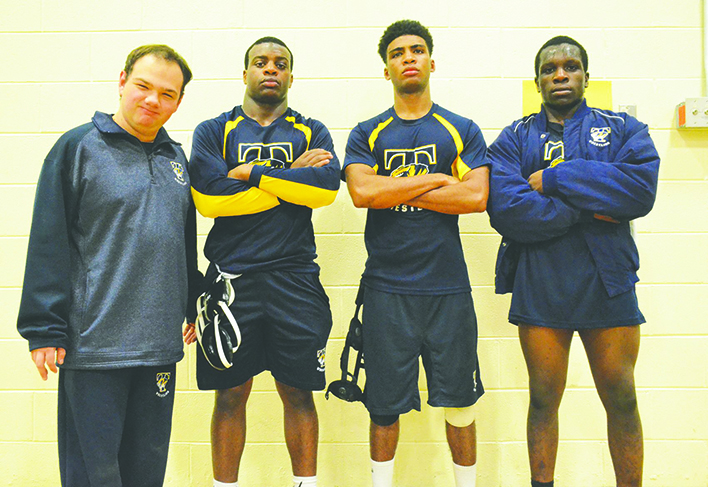 LAGRANGE – He loves being in the wrestling room.

Following an intense football season that ended with a loss in the opening round of the state playoffs, Troup High’s Dre Flagg could have taken some time off to rest and recover  from all the hard work he’d put in during the previous three months.

Instead, as soon as football ended, Flagg was in the wrestling room preparing for what he hoped would be a productive senior season in that sport.

“Football season was great,” Flagg said. “We went 8-3, and should have went further than that. But it happened. Then right after football, there was no break and I went right to wrestling. You have to cut weight. But it’s been a blessing. I love the sport. I love everybody to death.”

Before a recent home wrestling match, Flagg and the team’s other three seniors were recognized for the contributions they’ve made to the program.

Flagg was a standout defensive player for the Tigers, who finished second in the region to earn a home playoff game.

Flagg is also a key member of the wrestling lineup at 170 pounds, and he has helped Troup enjoy a sensational season that has produced four consecutive tournament championships.

The competitive Flagg enjoys the one-on-one aspect of wrestling.

In addition to what he’s done in the athletic arena, Flagg has also succeeded as a student, and he’s looking forward to becoming a high-school graduate next spring.

“That means a lot,” Flagg said. “I come from a background where a lot of my family didn’t even graduate from high school.

“I’ll be the first one in my immediate family to graduate from high school, and that means a lot.”

The other senior who is a regular member of the lineup is Harris, who won the 152-pound championship at the CRWA tournament.

Like Flagg, Harris is a four-year member of the Troup wrestling program, and that’s a family he’s been proud to be a member of.

“It means a lot to be a part of this program, this team,” Harris said. “We’re like a brotherhood out here. Everybody’s got each other’s back.”

Harris said one of the things he appreciates about being a wrestler at Troup is how it keeps pushing him to get better.

While Harris and Flagg are regular members of the varsity lineup, Thompson is not, but he doesn’t let that bother him.

Thompson works hard, and when he gets an opportunity, he strives to make the most of it.

“It’s never easy (being a wrestler), but I love it,” said Thompson, who transferred to Troup for his junior season. “It’s all you can hope for. You try your best to go out there and do something.”

Thompson said each time he gets to wrestle as a senior means a lot to him.

Kendall, the son of Troup football coach Lynn Kendall, has been a junior-varsity wrestler during his time at Troup, and head coach Craig Garner said he an all of the seniors are critical members of the team.

“All four of them, they’re very vital assets to our program,” Garner said.

Wrestling is a challenging sport, and Garner is appreciative of the seniors for making it this far.

“This sport, it’s not one of your glory sports,” Garner said. “Just being able to come out whether you’re a varsity guy or not, and wanting to be out there and get better, it tells you a lot about your character. I think wrestling is the epitome of defining your character.”