A time to heal 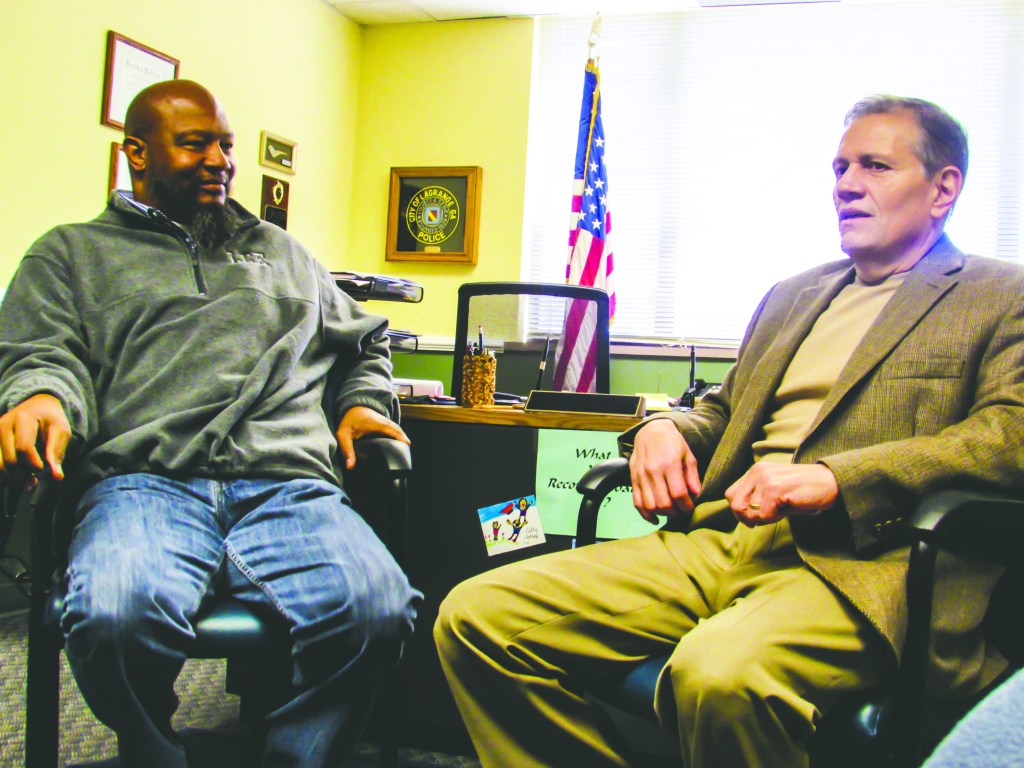 Ernest Ward, president of the Troup County NAACP, (left) and LaGrange Police Chief Louis Dekmar continue to plan an event of acknowledgement in the 1940’s kidnapping and murder of Austin Callaway, 18. The African American teen was arrested for allegedly assaulting a white woman in September, 1940. He was later taken by force by armed, white men from the LaGrange Police Jail, shot multiple times and left to die on the side of a road. (Photo By: Melanie Ruberti | Daily News)

A time to heal

LaGRANGE – When 18-year-old Austin Callaway, an African American male, allegedly assaulted a white woman on September 7, 1940, he was taken into custody by LaGrange police officers and placed in jail then located inside City Hall.

It was a routine arrest for that era.

What was not routine was the mob of armed, white men that showed up to the jail later that night and allegedly removed Callaway from his cell – and the custody of the LaGrange Police Department.

The men reportedly drove Callaway out to Liberty Hill Road, shot him several times and left him to die.

The incident was given little press coverage in Georgia – but received more media attention nationwide – including an article in the New York Times.

But no police report of the incident nor the jail records of Callaway have ever been found.

LPD Public Safety Chief Lou Dekmar said he never knew about the incident until a little more than a year ago.

“There were three women who were looking at historical pictures of officers with the police department on the third floor and they said, ‘They killed our people,’” Dekmar remembered. “A LaGrange police officer overheard it … got the story … and told me about it.”

Dekmar did some research and reached out to people within the community who knew about the incident. The chief was not pleased with what he discovered.

“This was an event that happened 76 years ago. Those that are still alive or those was passed the story down from generation to generation still foster a resentment in the community,” he said. “… in order to have a more effective relationship with the community, something had to be done.

“For the police, anytime you take someone into custody, you are responsible for their care, and well-being … and that didn’t happen here (with the Callaway incident). That’s where the police department failed,” Dekmar continued. “The acknowledgement is not to place blame, it’s to say, ‘We (LPD) did something wrong and we want to reassure the community that it won’t happen again…”

With the support of LaGrange Mayor Jim Thornton, LaGrange City Council, local NAACP President Ernest Ward and several other community leaders, Dekmar will publicly acknowledge the incident and the failure to find justice for Callaway during an event on Jan. 26.

“This is powerful for the chief to do something like this … it’s like lifting a veil to acknowledge something that happened 76 years ago,” said Ward. “This event is not to benefit him (Dekmar). He is a visionary. Some people hold on to the past … but if we have the incident acknowledged, it helps the community move forward into a better relationship with each other.”

“I have not felt any pushback from people about the event, but I have had inquiries into why I want to do this … this happened a long time ago,” Dekmar said. “For those who believe it is past history, I would remind them that I had comments from the African American community … that the incident is a ‘living history.’ For those who are cynical, this event is an opportunity to have a dialogue that that hasn’t happened yet. It gives us a chance to improve relationships within community, within races and allows us to move forward as a community that is united and not divided … I would invoke the St. Francis prayer ‘seek to understand.’ We want to build trust. The event is an opportunity to close that chapter and start a new one.”

The public acknowledgement is expected to take place at the Warren Temple United Methodist Church at 416 E. Depot St.

It is the same sanctuary where Reverend L.W. Strickland hoped to renew the Callaway investigation and reached out to Thurgood Marshall, then the legal counsel for the National Association for the Advancement of Colored People, or NAACP.

Marshall went on to become the first African American Supreme Court Justice in October of 1967.

While a formal federal, state or local investigation into Callaway’s murder never took place, Ward said the 18-year-old man did not die in vain.

“His death is what created the NAACP here in LaGrange,” Ward explained. “His death helped bring about a definition of ‘lynching.’ Prior to that, the incident was just thought of locally as a ‘hanging.’ Austin’s lynching was the catalyst to define lynching and pass legislation against it.”

Both Ward and Dekmar hope the public acknowledgement of Callaway’s kidnapping and murder will bring healing to what some believe is still a racially divided community –  and build trust among residents and government officials.

“… to think that an individual (Callaway) was totally erased from the community … to where he didn’t exist. The efforts of the Chief are to un-erase him and let the community know he (Callaway) mattered. If that doesn’t bring healing, I don’t know what can,” said Ward.

“I’ve been heartened at meetings about this event because the group is made up of black and whites that are working together to recognize this incident has to be acknowledged,” Dekmar said. “This is the first step that will be a dialogue to unencumber a great community … that could be greater community if we’re all working towards the same goals.”

Dekmar said the lack of public records about Callaway’s arrest, kidnapping and murder makes it unlikely there will be a formal investigation into the matter.

Both men said there is still a lot to learn about Callaway, who may also have used the last name of Brown.

That information includes the 18-year-old man’s final burial site. He is believed to be in an unmarked plot somewhere off Hamilton Road.

The final piece of that puzzle may finally bring peace to Callaway, his family and residents of Troup County.

The event will take place at the Warren Temple United Methodist Church on Jan. 26 at 6 p.m.

It is open to the public.

Members of Austin Callaway’s family are expected to attend.