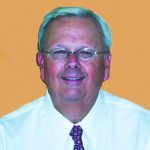 Mr. Deyo was born May 14, 1950 in Springfield, OH, son of the late Herman J. Deyo and Ada Eileen Healea Deyo.  In his younger years he was a cub scout, was a member of the high school drumline, and played the bass guitar in his local band called “Skip In The Shadows”.  Mr. Deyo proudly served his country in the U.S. Airforce, during which time he served in Vietnam.  He worked in the automobile industry most of his life and was employed by All Pro Auto Group as the sales manager before retiring.  Mr. Deyo loved flying, playing golf, and was a very passionate Ohio State Football fan.  But Mr. Deyo’s proudest moments in life was the birth of his two sons, David and Christopher, and marrying his loving wife, Sandra.

The celebration of life service will be held 7:00 P.M. Thursday, January 19, 2017 in the Chapel of Striffler-Hamby Mortuary with Pastor Michael Fortenberry officiating.  The gathering of family and friends will be on Thursday from 6:00 P.M. to 7:00 P.M. at the funeral home.  The family will have a reception at the funeral home immediately following the memorial service.

In lieu of flowers the family has requested that all contributions be made to the “Make A Wish Foundation” in memory of Mr. Raymond K. Deyo.