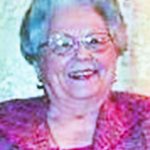 She was born in Forrest County, MS, on October 26, 1931, to Lela and Sidney Weatherford.  She was preceded in death by her parents, her sister, Mary Dell Slack (Robert), her brother, Leland Cagle Weatherford (Kish), and her beloved husband, Dewey Ray McKenzie.

Betty and Dewey were members of First Baptist Church after they moved to LaGrange in 1963.  They were active in the church choir and Sunday School.  Betty was Executive Director of the American Red Cross for the Troup County chapter.  She worked as the financial secretary at First Baptist Church for a number of years.  Most recently she was a member of First Presbyterian Church and was active in the Gospel Sunday School class.  Betty moved to Poplar Creek in 2014, after Dewey’s death, and was loved and cared for by their staff.  She was dearly loved by her children, grandchildren and great-grandsons.  They brought her much joy and were the light of her life.  Betty will be greatly missed by all her knew her.

There will be a graveside service to celebrate Betty’s life on Saturday, January 27, 2017, at 11:00 am, at Shadowlawn Cemetery.

In lieu of flowers, the family respectfully suggests donations be made to First Presbyterian Church, 120 Broad Street, LaGrange, GA, 706-884-4064.

Those wishing to share a condolence or remembrance with the family may do so by visiting www.shlagrange.com