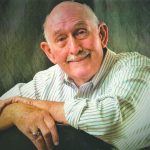 After suffering for several years with pulmonary fibrosis, Pete Williams went to be with our Creator February 1, 2017. He left from the caring arms of those attending him.
Richard Pharr “Pete” Williams was born in College Park, Georgia in July 1935. Mr. Williams was the only child of the late Robert Edward Williams and Dora Seay Stevens Williams. He was a direct descendant of Colonel James Williams, American Revolutionary War hero, killed at the Battle of King’s Mountain, NC, October 8, 1780.
Visitation will be at AS Turner and Sons in Decatur GA on Saturday February 4 from 2:00 to 4:00 pm. The funeral service will be held Monday February 6 at 11:00 am at Oak Grove United Methodist Church in Decatur GA. A grave side service will be held in LaGrange GA on February 6 at 3:00 pm at Loyd Presbyterian Church.
A lifelong scholar, Mr. Williams graduated from LaGrange High School in 1954, received a LL. B Degree from Atlanta Law School, 1957; a BA from Oglethorpe University, 1975; Master of Arts in Biblical and Theological Studies & Divinity from Luther Rice University and Seminary, 2003 & 2011.
Pete was an accomplished tenor soloist. Trained by faculty of LaGrange College and Former Metropolitan Opera Tenor Ralph Errolle, Pete made his Atlanta singing debut with Albert Coleman’s Atlanta Pops Orchestra in June 1956 performing at local venues such as the Fox and Chastain Park. He served Atlanta churches as a soloist and director. He completed his singing career as a featured soloist for the Marietta Chorale and Decatur Civic Chorus including performances at Carnegie Hall and the Kennedy Center.
Pete spent most of his employment years in land acquisition for local governments/utilities, including City of Atlanta, MARTA, and Oglethorpe Power Corporation. Pete was instrumental in modernizing transportation in Atlanta including the Atlanta Land Department’s property acquisition for Hartsfield-Jackson International Airport’s Main Terminal and mass transit rail as the first MARTA Property Acquisition Officer.
Pete had a keen sense of humor, especially wordplays and puns. He loved a good joke and enjoyed a hearty laugh. His quick wit, lyrical voice and bright mind will be missed by those nearest to him and the Decatur music community he loved so much.
Pete is survived by his four children, John “Chris” Williams, Ann Williams Cowan, Robert Williams, Mary Williams Benefield, thirteen grandchildren and former spouse/local business owner Elizabeth Goldwire Williams.
In lieu of flowers, please send donations on behalf of Pete Williams to Decatur Civic Chorus, PO Box 1361, Decatur, GA 30031