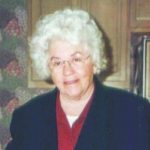 Rachel Estelle Mallory Jones passed away Wednesday, February 15, 2017 at Hospice of LaGrange following declining health.  Mrs. Jones was born in LaGrange, March 30, 1930 to Arthur Eugene Mallory and Cecile Alice Moore Mallory.  She was the fifth generation of the eight generations of her family to reside in Troup County.  She grew up in the historic Newsom home, “Nutwood,” which her parents restored and made their family home for several decades.  She graduated from LaGrange High School in 1948, Sullins College in Bristol, Virginia, in 1950, and attended Auburn University.  She was preceded in death by her parents; a sister, Alice Mallory Fletcher, a brother, Arthur E. Mallory, Jr., her twin brother, Richard Henry Blalock Mallory, her husband, Grady David Jones, who she married in 1951, and by a special friend, Milton Hardwick Strickland, Jr.  She is survived by a daughter, Dr. Margaret Eugenia Jones Harry and her husband, James (Jim) Harry, and a son, William Luther Jones and his wife, Tracy Hope Jones, all of LaGrange, and by six grandchildren; William Rett Jones and his wife Kimberly DeVincentis Jones of Columbus, Adrienne Hope Bass, Rachel Ann Harry, Margaret Elizabeth Harry, Mallory Elizabeth Jones, and Dawson Alexander Jones, all of LaGrange.

Mrs. Jones was a licensed real estate agent, first working for Harrison B. Preston at LaGrange Realty & Insurance Company on the Square in LaGrange.  She founded Hunsy, Inc., a real estate and rental company, about 1977, which she owned and operated from 1981 until 2004 when she retired, assisted for a time by her son, in the Mallory-Hutchinson Building, one of her properties.  The company name came from the nickname of Mrs. Jones’ paternal grandmother, Margaret Eugenia Adams Mallory.  Mrs. Jones’ son and son-in-law both had law offices in the building.  Mrs. Jones was active in Downtown Development and the Chamber of Commerce.  In 1999, she helped plan June Fest activities on the Square which served as a send-off for Pam Kennedy to the Miss Georgia Pageant.

A member of First Baptist Church since 1942, where she was a member of the Ruth Sunday School Class, Mrs. Jones was active in civic, church, historic, and patriotic organizations.  She was a member of the LaGrange Chapter of the Children of the American Revolution and joined the Daughters of the American Revolution in 1948, twice serving as Regent of the LaGrange Chapter, including the year of the American Bicentennial.  She served on the Bicentennial Committee of LaGrange, 1974-1976.  When the statue of the Marquis de LaFayette was dedicated by Count Rene de Chambrun, a descendant of LaFayette, she helped entertain him.

Services will be held Sunday, February 19, 2017 at 3 pm at Hunter-Allen-Myhand Funeral Home Chapel, conducted by Pastor Cade Farris and Associate Pastor Paul Blair.  Interment will take place in Shadowlawn Cemetery.  Hunter-Allen-Myhand is in charge of arrangements.  Those wishing may make a contribution to Woman’s Club of LaGrange.

by visiting www.hunterallenmyhand.com and posting your tributes and memories.