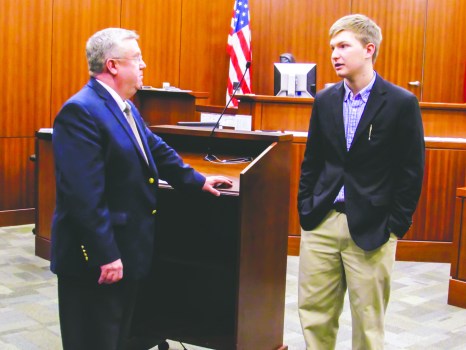 Troup County Sheriff James Woodruff shows Jacob Hendrix, 16, around a courtroom inside the Troup County Government Center on Ridley Avenue. Hendrix shadowed the Sheriff for a day to learn more about the day to day duties of law enforcement officers. The Callaway High School student attended meetings with the Sheriff, plus toured the jail, courthouse and more. (Photo By: Melanie Ruberti \ Daily News) 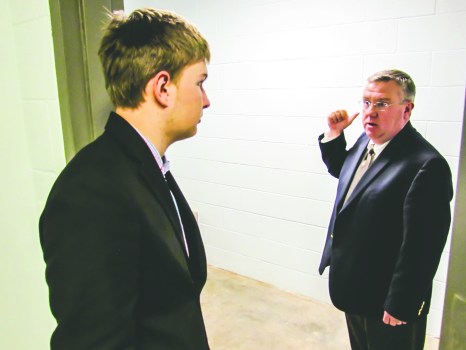 Jacob Hendrix listens as Troup County Sheriff James Woodruff explains more about the holding cells for inmates inside the Government Center. Hendrix shadowed the Sheriff for a day to learn more about the day to day duties of law enforcement officers. The Callaway High School student attended meetings with the Sheriff, plus toured the jail, courthouse and more. (Photo By: Melanie Ruberti | Daily News)

LaGRANGE –  Jacob Hendrix is only 16 years old, but has a very clear picture of his future career.

The Callaway High School student wants to be a law enforcement officer – specifically an officer with the Department of Natural Resources.

He received a sneak peek of what his prospective profession may look like when he shadowed Troup County Sheriff James Woodruff on Thursday.

Hendrix began his day with Woodruff at 8 a.m. inside the Troup County Sheriff’s Office. From there, he toured the jail, spoke with an inmate, was introduced to deputies, investigators and jailers, attended meetings, received a full tour of the county courthouse and ate lunch with the Sheriff. The student also stood alongside Woodruff at a funeral he attended late in the day.

“There’s a lot that he does,” Hendrix said. “He’s busy but stays very focused all the time. I don’t know if I could do all that.”

Woodruff was very candid with the student about his daily duties.

“Well, I’ll be honest. Sometimes I get tied down … so I stick to a strict schedule,” the sheriff said. “If I don’t, I’ll get pulled in many different directions and forget something I had planned to do.”

The 16-year-old young man developed a passion for law enforcement after his uncle passed away. Hendrix’ uncle was a member of the LaGrange Police Department, Troup County Sheriff’s Office, Georgia Bureau of Investigation and the Georgia State Patrol before he died, the student said.

“I started looking back at his career and I also looked at Mr. Woodruff and his career. They both do their jobs with a Christian character and attitude. I’m glad they do … it’s what I want to do too,” said Hendrix.

Woodruff shared with Hendrix one of his mantras – to live by the biblical golden rule.

“Do unto others as you would have them do unto you (Matthew 7:12),” Woodruff stated. “When I deal with families, I always think, ‘What if this was my family?’ I talk to inmates and their parents. There are a lot of good men and women in jail that made a bad mistake. None of us our above making a similar mistake.”

The Callaway High School student reached out to Sheriff Woodruff earlier this week about shadowing a member of the Troup County Sheriff’s Office. Woodruff immediately extended an invitation to Hendrix and told the young man he would be his personal tour guide.

“It’s refreshing to see young men and women in today’s society take an interest in law enforcement, especially with everything that has gone on (shootings, protests, etc.),” Woodruff stated. “They see it and still want to become officers. Thank God for that because if they didn’t, where would we be 20 years from now? Thank God for students like Jacob who want to stand in the gap. Jacob is a very knowledgeable young man and picks up on things quickly. It’s easy when you love what you do.”

“This is the field I want to get into, if the Lord guides me that way,” Hendrix stated firmly. “But if he guides me in another direction, then I’ll go that way.”

The 16-year-old young man will have dual enrollment next year and be a student at Callaway High School and at West Georgia Technical College. Hendrix will begin courses in criminal justice at the college.

After graduation, Hendrix plans on either joining a law enforcement agency and/or finishing his college education. 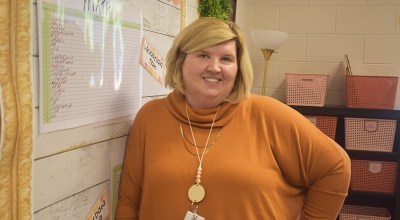 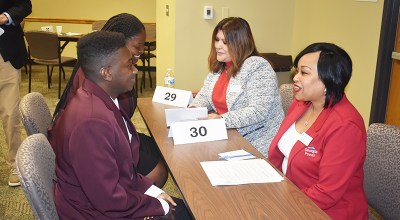