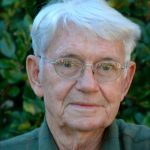 Robert T. Bass, Sr., 93, passed away on February 10, 2017, in Jacksonville, FL.  He was born January 23, 1924 in LaGrange, GA.  He moved to Baltimore after graduating from LaGrange High School and worked for the Glenn Martin Aircraft Company on the B29s until his return to LaGrange after the war.  He worked for Borden Ice Cream Company as a refrigeration service repairman and later started Bass Equipment Company, a air conditioning and heating company in 1953.  He installed the very first residential central heating and air conditioning system in LaGrange and continued to service and install systems for 54 years until he retired at age 84.

He had a kind and generous spirit, often not accepting pay from those who couldn’t.  Even though he worked hard for his customers, he never missed his children’s events and his family always came first.  He was a devoted husband, married to his wife, Mary, for 51 years and never left her side.  She always bragged, “I got the best man in the world”.

Words of comfort may be shared with the family at www.hardage-giddensbeacheschapel.com