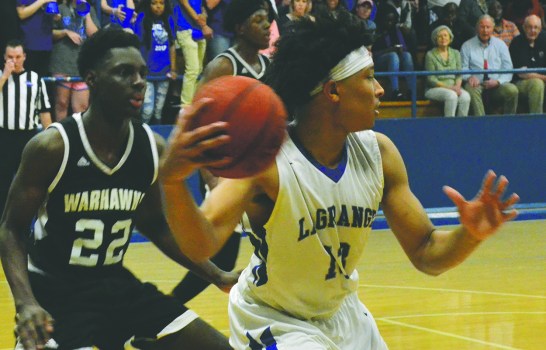 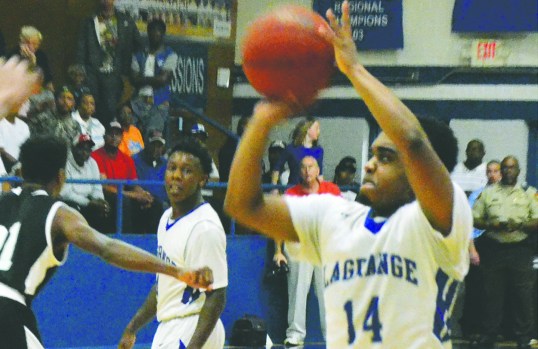 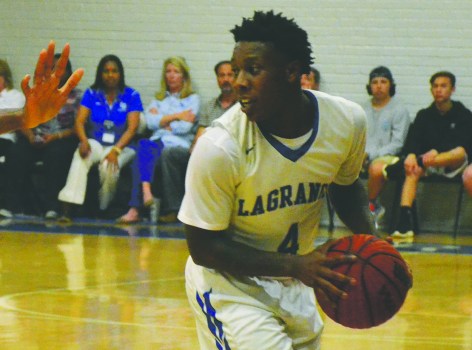 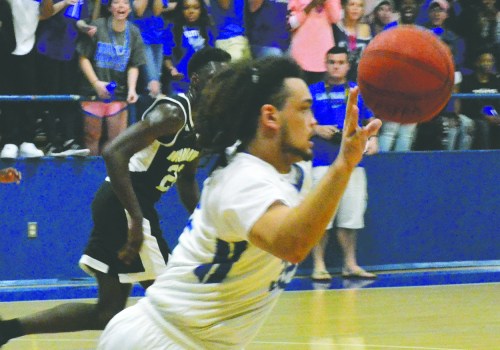 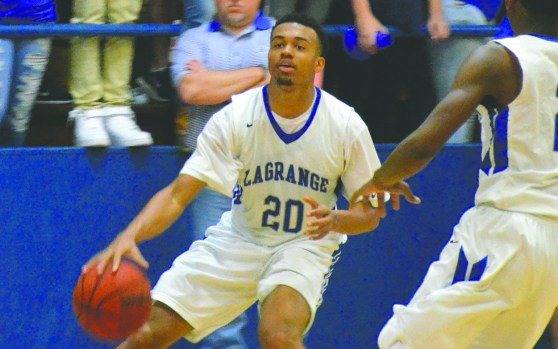 LAGRANGE – They were eight minutes away.

As the third quarter of Wednesday’s state-tournament showdown came to a close, the LaGrange Grangers were holding a 54-41 lead over visiting Henry County, and the old gym was rocking.

The Grangers were one quarter away from earning an invitation to the final four in Augusta while moving within two victories of a Class AAAA state championship.

Henry County, which trailed by as many as 16 points late in the third period, outscored LaGrange 21-7 in the fourth quarter, and Damion Rosser made a free throw with two seconds left to give his team the lead.

LaGrange missed a half-court desperation shot at the buzzer, and it was Henry County escaping with a dramatic 61-60 victory to advance to the final four in Augusta on Saturday against unbeaten Upson-Lee.

For LaGrange, it was a heart-breaking conclusion to a special season.

The Grangers (26-4) captured a third consecutive region championship, and they won two games in the state tournament to reach the elite eight for the second time in three years.

The Grangers were hoping to reach the final four for the first time since the 2009-2010 season when they played for a state championship.

“I’ll never forget this group of young men we had this year,” said LaGrange head coach Mark Veal. “We’re upset and disappointed obviously now, and it just almost seems unfair that it had to end like this.”

The Grangers were flying high when they went up by 16 points in the closing moments of the third quarter, and they were still ahead 54-41 even when Damion Rosser hit a 3-pointer at the buzzer.

In the fourth period, the Warhawks fought back, and they took the lead on a Seth Brown dunk with 48 seconds left.

With 44 seconds to play, LaGrange’s LaPerion Perry made one-of-two free-throw attempts, and the game was tied 61-61.

The Warhawks ran the clock almost all the way down, and with less than five seconds left, Rosser made a move to the basket, and a foul was called as his shot was blocked.

With LaGrange’s frenzied fans doing their best to offer a distraction, Rosser missed the first free-throw attempt, but he made the second one to put the Warhawks on top by one.

Perry was able to get a shot away from just inside half-court, but it missed, and Henry County had the win.

Henry County is moving on in large part because of the big advantage it enjoyed at the free-throw line.

While LaGrange struggled and was 9-of-22 from the line, Henry County was 18-of-20 from the line, and Javon Greene made all nine of his free-throw attempts.

“We’ve been able to hit clutch free throws,” Veal said. “We did against Richmond Academy (in the second round), and tonight we didn’t.”

Rosser, after being held to two points in the first half, broke loose for 16 points in the final two quarters and he finished with 18 points, and he was 5-of-6 from the line.

Greene scored 17 points before he fouled out late in the fourth quarter, and Keith Anderson had nine points.

For LaGrange, Perry had 19 points in his final high-school game, and Bo Russell scored 14 points.

After the game, Veal had to say goodbye to a group of seniors who he has grown so close to over the years, and who have accomplished so much during their time at the school.

“You form close relationships,” Veal said. “Most of them have been in our program for four years. We’ll miss them.”

It was close early, with the Grangers taking a 14-11 lead after the first quarter.

In the second period, the Grangers began to create some separation, and they were ahead 30-17 after Fanning scored with 3:15 left in the half.

The Warhawks got as close as eight on a three-point play by Greene, and LaGrange was ahead 33-24 at the break.

Perry, who was coming off a 32-point performance in the second round of the state tournament against Richmond Academy, had 14 points in the first half.

The Grangers led by as many as 12 points early in the third period, but the Warhawks got within six on a pair of Greene free throws with 2:56 left in the quarter.

Jarious Freeman answered with a 3-pointer to give the Grangers a nine-point cushion, and they went on to lead 54-38 before Rosser hit his buzzer-beater from long-range, making it a 13-point game.

In the final quarter, the Warhawks scored six quick points, and  with seven minutes to play, they were within seven points.

Henry County continued to eat into the deficit, and when Greene made two free throws with 3:24 to play, LaGrange’s lead was down to 57-56.

The Grangers seemed to regain a bit of momentum when Greene was called for a charge, which was his fifth foul of the game, and Fanning scored with 2:38 to play to give the home team a 60-56 lead.

After the Grangers missed two free throws that would have extended the lead to six, Josh Steele buried a 3-pointer with 55 seconds to play, and the Warhawks were within one.

Henry County forced a turnover on the ensuing inbounds play, and that led to a Brown dunk, and LaGrange trailed by a point.

Perry was quickly fouled, and his free throw tied it, setting up the Warhawks’ final possession.