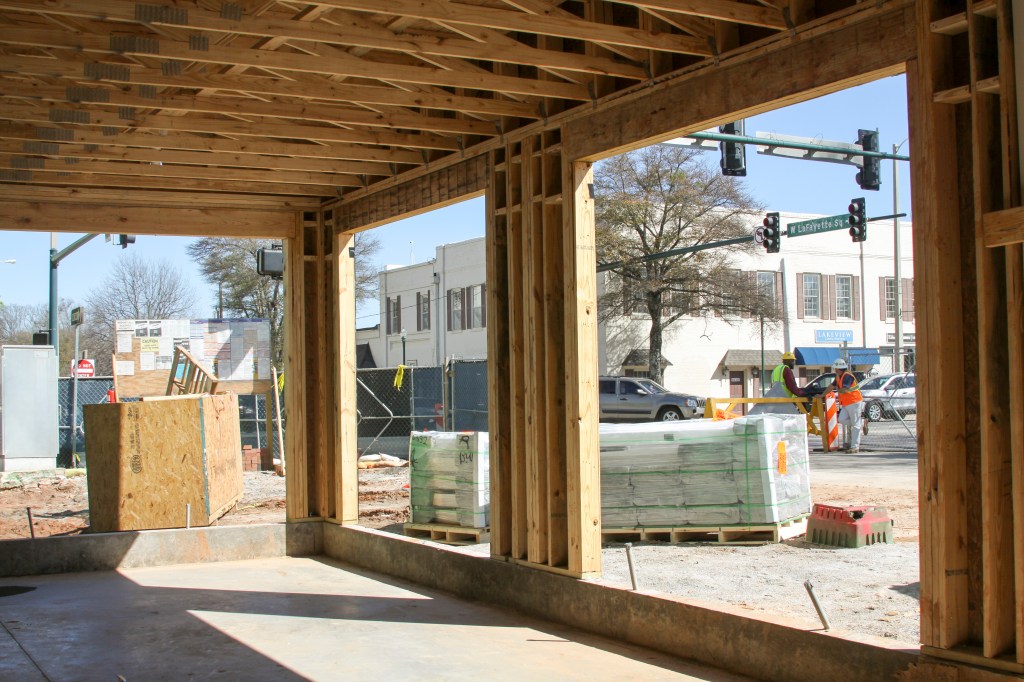 The hotel’s fi tness room is set to look out over LaFayett e Square through “store front glass” which will allow guests exercising to look out without pedestrians seeing inside. (Photo by Alicia B. Hill | LaGrange Daily News)

LaGRANGE – Like a phoenix rising from the ashes, downtown LaGrange’s new hotel has risen from the rubble of the former Mansour’s building with remarkable speed and is already beginning to take shape as a notable feature of the growing downtown area.

“We look at this as a legacy thing,” said project manager Adam Marona from Ra-Lin. “We know how special Mansour’s was to the community for so many years, and our hope is that this serves that same purpose for longer than what Mansour’s did. Just when you involve all the history and everything – as a company, we are very proud to be a part of this.”

Those responsible for city planning and attracting business to LaGrange have hoped for a hotel in the downtown area for decades, but it was only in recent years that the project became possible. The LaGrange Courtyard by Marriott is set to look notably different from the other 900-plus Courtyards in 37 countries around the world in that this one was designed specifically to fit in the with LaGrange’s downtown.

“You are going to see a lot of design on this one from decorative railings around the windows on the exterior,” said Marona. “On the top, you are going to see all these cornice pieces, just little design things… LaGrange has this long, storied history and that is the goal here: to get something that goes along with the look of the rest of the rest of the downtown area and the square here. That was our main goal, and I think that is what they accomplished.”

Much of the interior of the project was designed by Marriott, but a local architect was consulted to ensure that the exterior would match the unique aesthetic of downtown. The project has also strived to employ local labor as much as possible, and Marona estimates that about 70 percent of the workers working on finishes will be local.

Also, despite the large number of deliveries going to and from the construction site, both Marona and Lt. Mark Kostial of the LaGrange Police Department’s Patrol Division report relatively smooth traffic flow around site with minimal delays.

The Courtyard – like most hotels – is being constructed from the top down. According to Marona, the construction order is common for hotels because it makes it easier to make sure that everything that needs to connect to the roof is in and properly connected before other parts of the building progress. It also allows them to get a roof on the building as soon as possible.

“You have your roof penetrations and everything where your air-conditioning (units) are on the roof,” said Marona. “First floor is takes longer because that is where you have your kitchen equipment, your laundry equipment, all these things that they do back of house, so fourth and first generally take a little longer then the middle floors do. … We are able to start on the fourth, get everything out of the roof that we need. That allows us to go ahead and roof it –  which we have done. We are completely roofed in the dry – by in the dry I mean we are basically a fully enclosed structure right now other than windows and doors. But that is why we start on the fourth. That is the easiest way for us to get a roof on – in the dry – and then we can work down from there.”

The hotel is set to feature a bar/bistro that will be open to the public – though it is likely that hotel guests will venture to one of the many downtown restaurants within walking distance of the hotel – a business center, two conference rooms, an outdoor splash pad that will be shielded from the street by a screen of greenery and an exercise room that will look out on the square through one sided “store front” glass windows. Project managers are extremely satisfied with the progress of the hotel so far.

“It’s going well,” said Superintendent Matt Steed, who is working on the parking deck that is being constructed alongside the hotel. “It is a slow start, but that is sort of how everything is, but it is picking up.”

Officials hope that the parking deck will relieve a large part of the parking problems in downtown, and it is set to open at latest, when the hotel opens.

“We will be fully sheet-rocked in the whole hotel by the end of April,” said Marona. “The first floor, everything, so that is when we will start doing our finishes as far as wall coverings, paintings. We will have the whole thing complete – barring a natural disaster – by the end of April.”

“We poured this slab (of concrete in the lobby) on Dec. 28 at 2 in the morning, and it was 58 degrees,” said Marona. “That is unheard of. You just don’t get to do that much. We feel very fortunate.”

Besides the mild weather, Marona attributed the hotel’s swift progress to the help and cooperation from local officials, but officials were quick to wave off the compliment as something they gladly do for all new projects moving to town.

“We’ve done everything we could to accommodate them, but that is not just them, we really try to do that for every project and every new business coming into town,” said Mayor Jim Thornton. “… We have so many good and important projects going on right now that I really want to do everything I can to make sure they come to fruition.”

The hotel’s construction is currently ahead of schedule, and it is projected to open on schedule this fall.

“I can’t get over how accommodating everyone has been here to us,” said Marona. “LaGrange has a unique quality to it, that I don’t know that I’ve witnessed before. You can tell that this is a very family-oriented area down here, and when you have everyone on the same page you get so much done. … It sounds like LaGrange is really on a path of something special, and Ra-Lin will always be glad that we were able to be a part of it.”