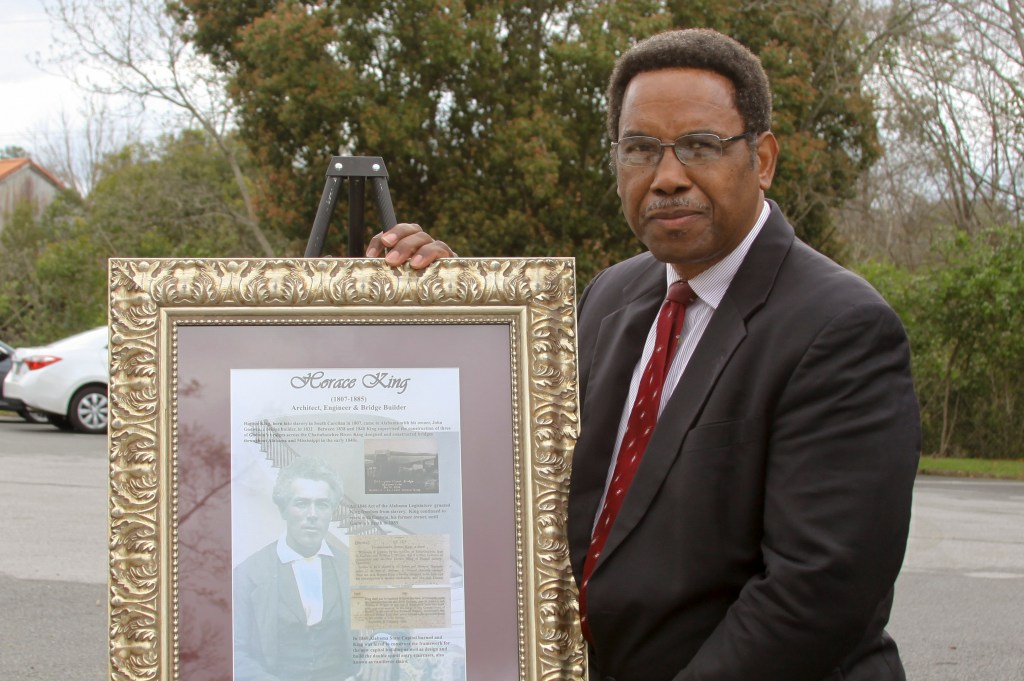 Dr. Richard Bailey, a prominent scholar on Horace King, shows off a replica of the plaque that was recently installed at the Montgomery capital memorializing King, during a ceremony to dedicate the new monument and markers at Mulberry Cemeteries on Tuesday. (Photo by Alicia B. Hill | LaGrange Daily News)

LaGRANGE – Despite the cold and threatening rain, local officials and historians gathered to dedicate the gravesite of famed bridge builder  Horace King and the approximately 425 individuals whose graves have only recently been marked in an effort to preserve the history of the Mulberry Street Cemeteries, formerly known as the Confederate cemetery.

The Mulberry Street Cemeteries Dedication served as a tribute to King, who is known for building bridges all over the Southeast and is believed to have helped plan some buildings within the city of LaGrange. The dedication ceremony on Tuesday paid tribute both to his life and the lives of the unknown individuals buried alongside him.

“We are proud in LaGrange of the connection that we have with Horace King and with the legacy of him and his family and what that means to our community both from a physical perspective – in some of the work that he did during his lifetime – but also from a cultural perspective,” said LaGrange Mayor Jim Thornton. “He is a very significant figure in African American history generally, but specifically in the community of LaGrange.”

The upgrades to the site include a newly place obelisk on the site of King and his son’s grave as well as historic markers and metal plates marking the sites of numerous unmarked graves. The new monument for King also includes a correction to King’s death date, which the previous marker had taken from a family Bible which was later found to be incorrect.

“Horace King has long been one of our great heroes – born a slave – but we also need to remember the close to 800 other people buried here,” said Kaye Minchew, a local historian.

The cemetery first came into use during the Civil War when the injured were transported by train from battlefields further north to LaGrange to receive medical treatment and recover. It is estimated that approximately 300 men were buried in the cemetery at that time. The fence that surrounds the confederate grave site was installed in 1902, and it is believed the majority of the people buried outside the fence were African Americans who died sometime after 1866. The Troup County Historical Society has attempted to find the names of those buried there, but so far has had little luck. King would have been buried at the site following his death in 1885.

“The obelisk is patterned after the marker that Horace King put up in Phenix City at his one-time owner’s grave – so John Godwin’s grave – so that is the only time we know of a (former) slave putting up a marker for his (former) owner, and so we are thrilled to be patterning it after that,” said Minchew. “… We are thrilled that we are gathered here all these years later to remember these people and to not forget their contributions to our society.”

Minchew recently represented the city at a ceremony that recognized King’s work in constructing the stairs for the Montgomery Capital building back in 1849.

“I believe it all boils down to the character of a man who did so much and asked for so little,” said Dr. Richard Bailey, a historian known for his research on King. “Horace King came to Alabama in 1832 with his owner – John Godwin. They built the first bridge that connected Columbus. Georgia and Phoenix City, Alabama, and as you well know, Phenix City was at that time called Girard. This bridge helped to increase westward migration.”

King was freed by an act of legislature in 1846 and continued building bridges with Godwin afterwards. He is credited with building hundreds of bridges and structures in his lifetime.

“He (King) was a slave for the first 39 years of his life, then he was a freeman, a business owner, an architect, an engineer, a builder, a politician,” said Skip Smith, chairman of the historic preservation commission. “Every time I get the chance to study a little more about Mr. King – I’m not a scholar of him – I’m thoroughly amazed at all the accomplishments that he did in his lifetime. When I think of all the numerous projects that he has done – on bridges and buildings – he must have had several projects going on at the same time in different phases which can in itself be a task.”

Smith is an architect himself and expressed his excitement over the cemetery’s improved state and hopes that the improvements would help citizens recall past contributions and mistakes.

The cemetery was renamed by the city council last year to honor the broader history of those buried there – including King – and a number of improvements were made with the help of funding from a Georgia Tourism Development grant including paving the parking lot beside the cemetery to provide easier access and cleaning up the landscaping of the historic site.