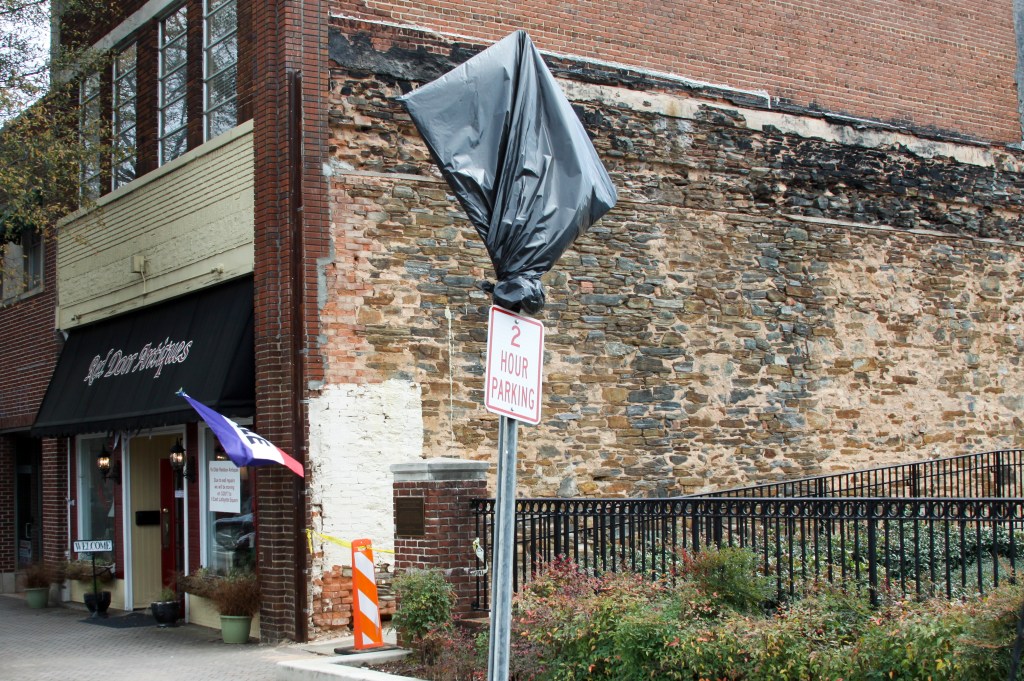 Red Door Antiques plans to relocate from its current location beside LaFayette Plaza to 6 E. LaFayette Square this week in preparation for work that will need to be done on the wall where the downtown mural was formerly located before flood damage made it necessary to take down the mural for safety reasons. (Photo by Alicia B. Hill | LaGrange Daily News)

LaGRANGE – The downtown hotel won’t be the only construction visible from the square for long: the wall between the LaGrange-Troup County Chamber of Commerce and Red Door Antiques will be receiving some much-needed repairs starting next month.

The wall – and mural that previously covered it – were damaged in the flooding at the end of 2015, and while the city originally hoped to repair the wall, the damage turned out to require more work than was initially suspected. The city plans to rebuild and replace the damaged wall with a finished surface of constructed material.

Due to the time that it will take to replace the wall, Red Door Antiques, who has shared the wall with the city for years, plans to relocate to what it plans to make its new home on another side of the square at 6 East LaFayette Square. Despite having little choice in the move, the owner feels like the move to a space with approximately 700 more square foot of space will be a good one for the shop.

“It really is looking good, and everybody is excited,” said owner Larry Shumake. “We have a lot of new merchandise coming in that wasn’t over there.”

Shumake plans to bring over old dealers to the new location along with new dealers, including the addition of gourmet candy to the store’s selection at the new location.

Red Door was asked to be out of their location beside LaFayette Plaza by March 28, and they plan to open the doors on their new location as soon as Monday, with a grand re-opening to be scheduled for a later date.