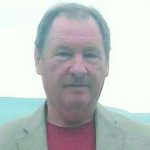 We all know that once you are a “Granger,” you really never leave. We may take a long trip elsewhere for a few decades, but our hearts are planted right downtown on the square; and people strolling by the fountain at night – when the water changes color – can feel your heartbeat underneath their feet. At least, that’s how I see it.
And that is why as we glance back home from 800 miles to the west we always feel the urge to tell a story about some hero whose path touched ours through the years. We have such a story today.
The hero: Mr. Gilbert Holliday.
Remember, there are two L’s.
Several years ago, we carried in our wallet a barely legible and brief note, scribbled on a tiny piece of paper. I had quickly grabbed paper and pen when I happened into an impromptu interview with this amazing gentleman down at what used to be the Callaway Y. I could not help but listen with admiration to his story.
Gil had been playing basketball at noon with the “boys down at the Y” for a few decades, I guess. You may remember we have told a few stories through the years about that bunch of boys who gather faithfully at the Y to play ball three times a week, including the likes of Steve Sauter, Ken Carter, and some others whose names escape me, probably because one or two of them threw my shot over into the stands and walked away shaking their head with a “better take that weak little shot back to Texas” look.
On one particular visit – back in 2001 – when we made our way down to the Y, age and ailments had put Mr. Gil into a brief ball-playing retirement – no, not age, just ailments, because I don’t think age ever limited Gil. He did not move fast, but he had made a determination to keep on moving for as long as he could breath. He inspires me today to try to be playing a little “ball” when I’m 80.
Even though he was unable to play that day, he still came on over and took his place on the sideline. It was between games when I sat down by Gill and had one of the best visits down at the Y I ever had.
There on the sideline, the ball bouncing in the background, Gil told us his story.
My recollection of all the facts of this story are sketchy – just like my notes – so I am sure I am not telling you all the important details. But I am sure I am telling you the most important one.
Her name was Julia.
The mere sound of that name was like the singing of angels to Gil Holliday. I could tell by the gleam in his eye when he talked of her.
“When we married,” he said, that gleam ever bright, “we owned a 1925 T-model Ford.”
Then he added quickly, with a laugh: ““Looked gorgeous to me.”
That much I wrote down in my scribbly notes. I turned my head a little sideways when he said it, because I was not sure whether he was talking about Julia or the ’25.  I think both.
Julia was his life, but he was pretty crazy about that T-model, too. He got to talking about it with a smile, telling me about how he and Julia were driving along one time – maybe it was on their honeymoon, or maybe they were just courting at the time – and the creek flooded and covered the railroad tracks and stranded the two lovebirds.
Not that it bothered Gil to be stranded with that girl, because it didn’t. I could tell. There was the inescapable evidence of that sparkling gleam, a slight crack in his voice, and a gentle glow of eternal love in his face.
Gil and Julia were married for 57 years, ‘til death parted them around 1996.
After our visit – cut short for the next game – we shook hands, and I thanked him graciously for sharing his life story, all in that one special name. I’ve heard a lot of stories playing ball down at the Y, but I’ve never heard one like that.
I never got to see Gil again. I had hoped to see him when I came back home later that summer. But when I got to the Y he wasn’t there. Immediately I asked my buddy Ken Carter, and Ken told me that Gil died, too, just a few months ago.
“I think he kind of grieved ‘til he died,” Ken said.
I’m sure he did. But he never lost that little gleam in his eye or heart for Julia. That much I know. Gleams like that don’t go away.
I still think fondly about Mr. Gil Holliday, the man who reminded me that “Holliday” has to have the two “L’s.” Seems fitting — doesn’t it – for a man who lived one of the loveliest love stories of all.