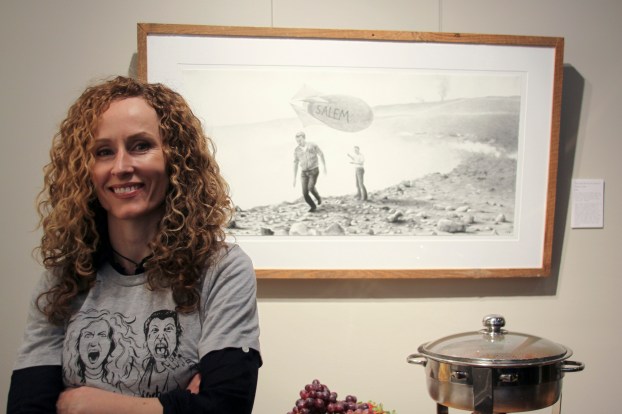 Sarah Swanson poses with one of her drawings. (Photo by Alicia B. Hill | LaGrange Daily News)

HOGANSVILLE – Local art aficionados gathered together in Hogansville Saturday night to take their chances with the Suffering Artist’s latest exhibit: Death by Carbon.

The little gallery in downtown Hogansville was packed elbow to elbow with art lovers striving to see the moving original works that two local artists created using one of the most abundant elements in the universe, in the form of a collection of graphite drawings – since graphite is carbon’s distilled physical form – that the artists hoped would bring people as much joy to see as they were to create.

“You’ve heard of death by chocolate?” said gallery owner and featured artist, Sarah Swanson. “It is very much the same kind of sentiment that you’ve got that release – just that euphoric feeling – of having so much chocolate. It is very satisfying in a desert. Well, that is how we feel about doing these simple graphite drawings. It is that same relief or release – the same kind of satisfaction.”

While Swanson found her pieces euphoric, her fellow artist who was also featured in the show found her drawings meditative.

“I started about six months, seven months ago meditating at least once a day, and now I do it twice a day, and I’ve found that what I wanted to do was start drawing,” said featured artist, Amber Stidham. “I wanted to start drawing nature and animals and plants. … I did mixed media work before and collage work, and so now I’m moving into drawing.”

Stidham’s work on display at the show heavily featured natural elements like plants, birds and bugs, and her original framing choices were in some cases almost as eye catching as the sketches themselves, though the art itself refused to be ignored.

Like a window into another soul, Swanson’s work clearly displayed its own area of focus and the artist personal interests with drawings based on magazine clippings ranging from a drawing based on a photo from an old National Geographic to the reimagining of a barometer that she saw in an old advertisement, but these differences did not make her work any less meaningful.

“If you go up and see the name written on the balloon there – and the plaque next to it says a little bit about it – but she (my daughter) was adopted, and so that piece is dedicated to the birth mom,” said Swanson of one of her favorite featured drawings on display at the show.

The Suffering Artist gallery is located at 311 East Main Street in Hogansville. The pieces at the show are available for purchase through the gallery.

LaGRANGE – Sweetland Amphitheatre is getting ready to kick the concert year off with a bang with Grammy award-winning artist... read more