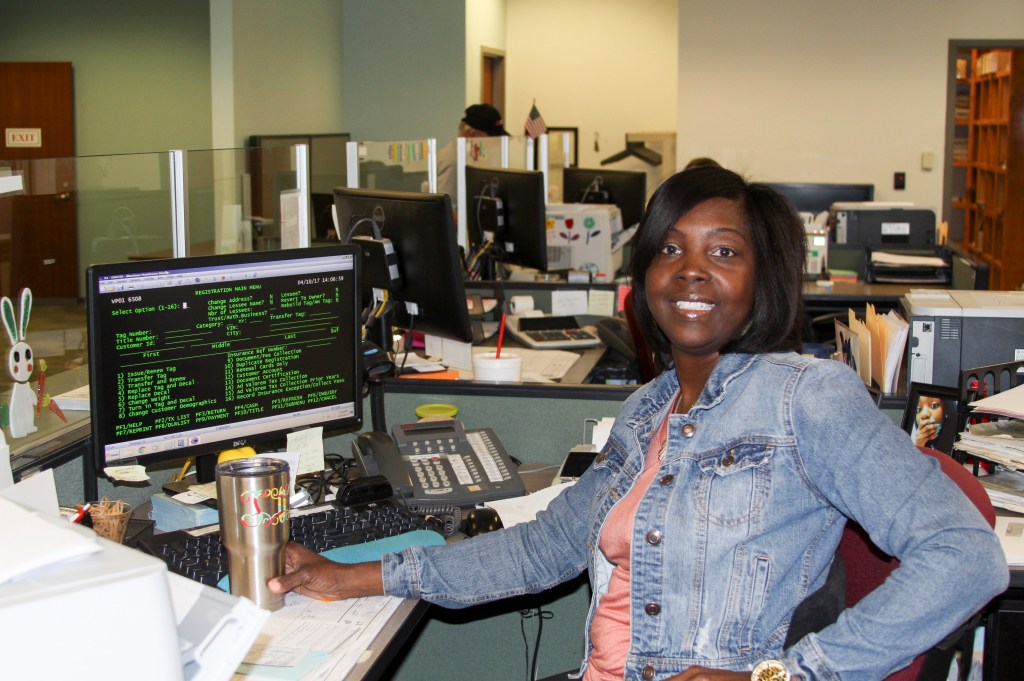 Tag and Title Clerk Tammie Owens is glad to be able to get back to work after a virus shut down county computers on Friday. (Photo by Alicia B. Hill | LaGrange Daily News)

LaGRANGE – When the computers began to go down at the emergency 911 headquarters at 1 a.m. Friday morning, officials knew something was wrong. Those suspicions were confirmed only a matter of hours later all of the computers in the county went down.

The virus froze county systems, making it impossible for county employees to access anything from tax records to court information or log payments to the county. It was only thanks to the work of experts from the county’s insurance company and information technology department that the county was able to get parts of the computer system back up and running on Monday.

“The insurance company is going to do a forensic review of everything,” said County Manager Tod Tentler, noting that the county does not believe that any information has been compromised by hackers.

Even with the computers down, departments have continued to run, with only a few departments going home early on Friday due to the hack. As of press time on Monday, the jail, emergency 911 and tax and tag office were all fully back online.  According to Tentler, technical experts were also working hard to get each of the other county departments up to at least one computer per office at that time.

“The IT department is working on the computers one at a time,” said Troup County Sheriff James Woodruff. “We’re still handwriting our reports, but the computers in the jail are working so we can easily book people into the jail.”

It may be late in the week before all county computer systems are back up and running, said Woodruff.

“We’re just taking it day by day, but at least progress is being made,” he said.

TCSO and LPD share the computer aided dispatch system (CAD) used by Troup County. The system generates case numbers for every call for service made by law enforcement officers. That software was compromised during the hack as well. According to officials, that was the only city-used system affected by the virus.

“Luckily, they didn’t get into the city,” said LaGrange City Manager Meg Kelsey, of the hackers.

The city and county are both making efforts to close the hole that the hackers allegedly exploited with new antivirus software that both plan to install in an effort to prevent future incidents like this one.

“We purchased antivirus software late Friday afternoon – about 5 o’clock – and we’re going to share the cost with the county on that,” said Kelsey.

Meanwhile, county recreation centers are making due with “limited registration” on tablets that were not affected by the virus in order to continue checking members into the recreation centers, and according to Parks and Recreation Director Cajen Rhodes, the upcoming USA South Spring Sports Festival that will be hosted at local college and county facilities should not be impacted in any way by the virus.

The source of the hack is still under investigation.