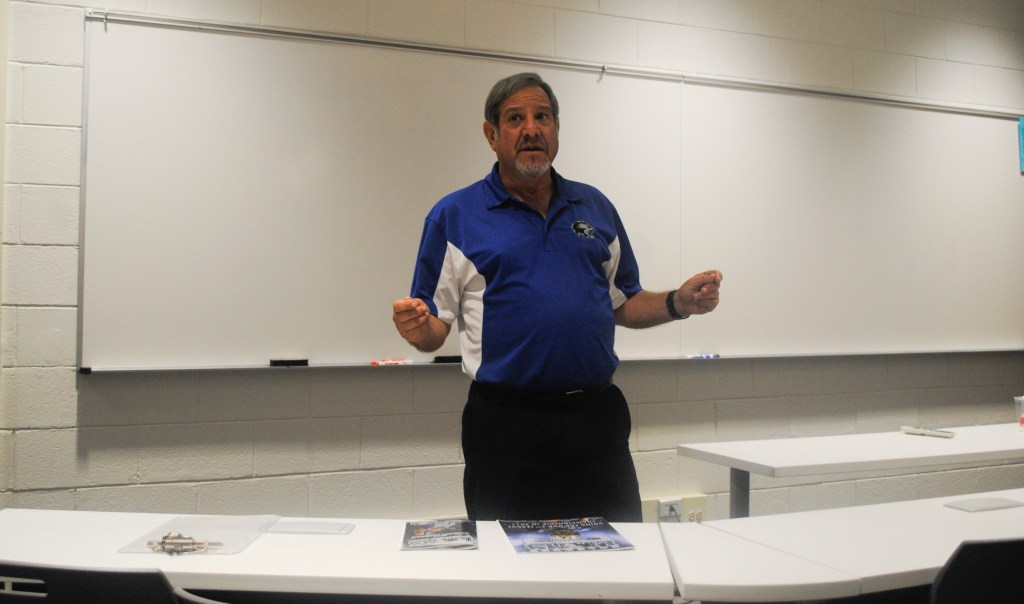 Rick Jacobson, co-owner and vice president of marketing of the Professional Indoor Football team Columbus Lions, spoke on everything from career advice to what the sports management job market looks like to describing his responsibilities in the everyday sales operation of the football team.

Jacobson discussed his early career working in internships for the Syracuse Chiefs (a minor league baseball team in Syracuse, New York) and with the West Haven Yankees (a former Double A minor league baseball team from 1972-1982) while having his hands in everything from writing press releases, getting involved with promotions and working in the press box during those internships.

“One thing I’ve learned in the business is that it’s good to be well-rounded,” said Jacobson, as he spoke to the class mostly filled with students who have their eye set on a career in sports management and marketing.

Jacobson told the class how he became a general manager for a sports organization at age 25 and how that led to different jobs across the east coast in sports like baseball (his favorite sport) and hockey but later received an opportunity to become vice president of marketing for the Columbus Lions.

“I’ve grown to love indoor football as much as any sport,” said Jacobson.

Jacobson then swung the conversation into sales, including the ins and outs of the profession, describing to the class that “everything is revenue-driven now” and that sales is a “people business” along with some of the key factors of being a productive and viable salesperson in a sports management role.  He even dove into the Lions process in selling tickets and advertising.

“Enthusiasm and passion is the key in the sports business and those traits are evident in a good salesman,” said Jacobson. “Someone has to sell the tickets in advertisement to make all the entities viable. If you compare professional sports organizations to colleges in sports, colleges already have a built-in alumnus and fan base. We don’t have that in pro sports but we have to develop it ourselves and not wait for fans to come to us. The careers in the sports business really come from the desire to bring others to what we enjoy ourselves as fans.”

On May 6, LaGrange College is planning on having a LaGrange College Night with the Columbus Lions during its home game. Jacobson aims to get as many students as possible involved, as well as spreading the word to the LaGrange community.

“If there can be an educated component to the College Night, then that would be great because it’s a community service from our end to provide that,” said Jacobson. “There are certain game duties we can assign for students and get them involved but most of all its an opportunity for people to enjoy a sport they don’t know much about or haven’t seen.”