Stepping out on faith 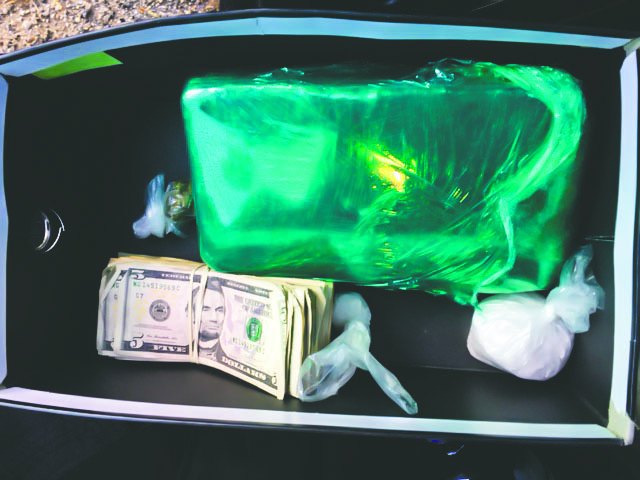 Sgt. Nathan Taylor, head of the Troup County Sheriff’s Office Narcotics Division, shows off items he seized during a recent traffic stop. The items inside the box include: 2.2 pounds of cocaine, two ounces of methamphetamine, a few grams of marijuana and several thousand dollars in cash. (Photo: submitted)

Michael Moat is no stranger to drugs, addiction, jail or violence.

The man started selling illegal narcotics on the streets of LaGrange when he was 17 years old.

It would be years later until Moat gave his life to Christ and became clean and sober.

Now, he is using his own story to propel others to take a stand in the community against drugs and gang violence.

Moat will lead people in “A Step in Faith Freedom March” on Saturday, April 29. The walk will start in the parking lot in front of LaGrange High School on North Greenwood Street and end at LaFayette Square.

Moat was partially motivated to hold the march by the movie, ‘An Appalachian Dawn.’

The movie is the true story of a drug infested town called Manchester, Kentucky, said Moat.

“Teens were dying every other day there,” he explained. “The town had a population of 20,000, but it was known as the ‘Pain Killer Capitol of the United States.’”

In 2004, 63 local churches banded together to pray and march in solidarity against drug abuse, Moat said. More than three thousand people joined the event to show their support.

“The march sparked a movement that changed the community,” Moat explained. “The town is now known as the ‘City of Hope.’”

Inspired by the movie, Moat said he later had a dream that led him to develop his own event.

“I prayed about it and the next day it was clear as day … I need to hold a similar walk,” he explained. “I don’t even like to walk. I don’t like to exercise, but I feel like God is telling me to do something that I don’t like doing to show him that I am willing. Then He will show me how big he is.”

Moat found out the hard way the consequences of using and abusing illegal narcotics. Meth was his drug of choice.

“I sold drugs … in this town. I’ve been in and out of prison. I’ve been close to death many times,” he stated. “DFCS (Division of Family and Children Services) took my kids because they all tested positive for drugs … I used drugs in my bathroom. Then my kids would go in there and the drug residue would still be on the counter tops.”

Sgt. Nathan Taylor has worked with the Troup County Sheriff’s Office for more than 12 years. He has headed up the TCSO Narcotics Division for four of those year.

The abuse of methamphetamines is a frequent find for Taylor and his investigators.

The use and abuse of illegal narcotics does not lead down a good path, as Moat discovered in the early morning hours of August 3, 2012.

“I had been back using and selling drugs for four or five months,” he said. “I was in bed and my feet were so swollen that I couldn’t walk. The doctors were talking about amputating my feet, I was overweight and I had breathing issues.

“I had a camera mounted on my front door and 6:30 that morning, I looked at the monitor … and all I saw was police coming through my front door …”

It was officers with the Georgia Bureau of Investigation. They arrested Moat and took him to the Troup County Jail.

That was the turning point for Moat.

“I thought, ‘I can’t keep doing this to my kids.’” he stated. “I went to Reformers Unanimous meetings, Alcoholics Anonymous meetings for 10 months. I tried doing something positive. I lost weight and was getting healthy again.”

But Moat faced another hurdle when he stood before a judge in a Troup County Superior courtroom months later. The Assistant District Attorney allegedly recommended Moat serve 10 years in prison.

He was sentenced to 10 years behind bars to serve five years and was sent to the Coastal State prison near Savannah.

“I kept reading my Bible and doing what I was supposed to do. And God showed me amazing things,” Moat said.

The man was also shown mercy and only served 14 months of his five-year sentence in prison. He walked away a clean, sober and free man in June of 2014.

“It’s like God had his hand on me the whole time … it was one the best things that ever happened to me,” Moat said. “Now I can stand up and say, ‘I was a horrible parent. I was an addict.’ As hard as it was, I had to admit those things to myself and then to others.”

Moat prays others will join him on April 29 and take a step in faith.

“I want the people of LaGrange to come who are tired of the gangs and violence, tired of children addicted to drugs, tired of adults addicted to drugs and addicts who are dying because of drugs,” he firmly stated. “We are going to take a stand, step out in faith and know that he (God) will make a change.

“I hope that everybody that comes feels the presence of Holy Spirit and has hope that we can make a difference in our community,” Moat continued. “We have to put our faith in God and we have to step out in faith in order to make change … Is it going to take one of us burying our children to make a change in this community?”

The former addict hopes area churches will also get involved in the march.

“In Manchester, it wasn’t just all the Baptist churches or all Methodist churches who marched …it was churches from all faiths,” Moat stated. “They broke down barriers and came together as a faith, not as denominations.”

Moat has made positive changes in his life. He is now in school to achieve his commercial driver’s license (CDL).

He hopes the march will help other addicts turn their lives around and eventually achieve their dreams.

“A Step in Faith Freedom March” will begin with a short program in the parking lot across from LaGrange High School at 10 a.m. on Saturday, April 29.

The march will step off at 10:30 a.m. and end at LaFayette Square where former addicts will share their testimonies during the annual Break Every Chain event.

Moat partnered up with the LaGrange Police Department and Break Every Chain for the event.

Anyone wanting information on “A Step in Faith Freedom March” can contact Michael Moat at 706-616-0461.

Details on both gatherings can also be found on the Break Every Chain Facebook page: www.facebook.com/breakevery.chain.184.