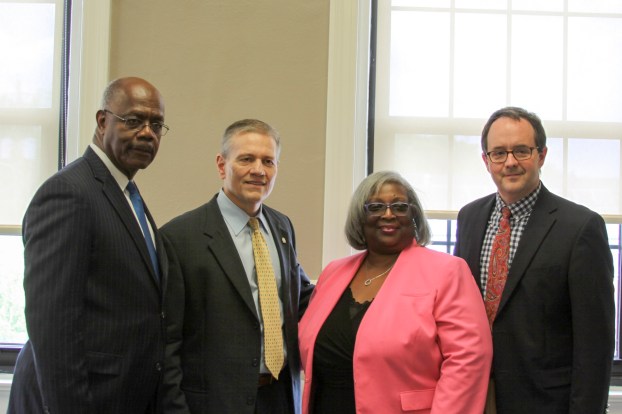 Fulton County District Att orney Paul Howard, Public Safety Chief Louis Dekmar, Deborah Tatum and LaGrange Mayor Jim Thornton met on Monday to talk about the effect that the apology for Austin Callaway’s murder has had on the community and surrounding counties. (Photo by Alicia B. Hill | LaGrange Daily News)

City leaders to be recognized

When Austin Callaway was lynched 76 years ago, little was said or done about it, but since the January apology from LaGrange Mayor Jim Thornton and Public Safety Chief Lou Dekmar on behalf of the city and police, his story has become known throughout not just LaGrange, but all over the country.

That acknowledgement has sparked conversations and a hope for renewed trust between the community, the police and the city.

Thornton and Dekmar are both expected to be honored at a ceremony in Fulton County later this week because of the change they helped move forward by apologizing for the errors of their predecessors, and Fulton County District Attorney Paul Howard stopped by on Monday to talk to them about the impact he is seeing in his district.

One of Callaway’s relatives joined the discussion.

“I think seeing that people’s disbelief that our police chief was actually apologizing for something that took place (76) years ago – people were in disbelief that he would come forward,” said Deborah Tatum, a lifelong resident of LaGrange and a distant relative of Callaway. “… But I think, why not? But when we stood there and did the candlelight vigil that Sunday morning, you really felt like Austin was there – his spirit – and there were people of every color, every denomination were there, and you felt like maybe he is at peace now. That is what I felt.”

Of the 600 names that were read during the calling of names service on the morning following the unveiling of a statue in memory of Callaway, 37 were from Howard’s district in Fulton County.

“There were 37 in Fulton so, we’ve got some healing to do in our county,” said Howard. “When I read about it… people were amazed. They weren’t amazed that something like this could happen in the South, but they are amazed that somebody acknowledged it and offered an apology.”

Howard pointed out that there was still a long way to go to create a bond of trust that will allow the community to not only trust the police, but become active participants in their local government. He did voice his belief that this first step was a big one and that Dekmar was a “hero” for taking it.

Dekmar denied being a hero, and affirmed his belief that everyone should be safe in police custody, an appropriate sentiment for the meeting which took place a few floors above where Callaway was held by police the night that he was taken out by a mob and lynched, a story that, until a few months ago, was not well known.

“What I think is really interesting and powerful about this whole thing is how you realize that some people you know… they are carrying this story around because they know this story or some aspect of this story, and they are carrying it around, but I knew nothing about it,” said Mayor Jim Thornton. “I’ve lived here 44 years… and I knew nothing of this story. Every community has these sort of secrets… but if we don’t do anything else other than just unveil some of that stuff that people are carrying around with them, that alone is progress. That alone is healing, and so, in addition to – I think we will improve relationships between the African American community and the police. It will do some of that. It will certainly help the individual family members, but we also get to the point where we just aren’t afraid to talk about things anymore.”

Sheriff’s car show set for May 6