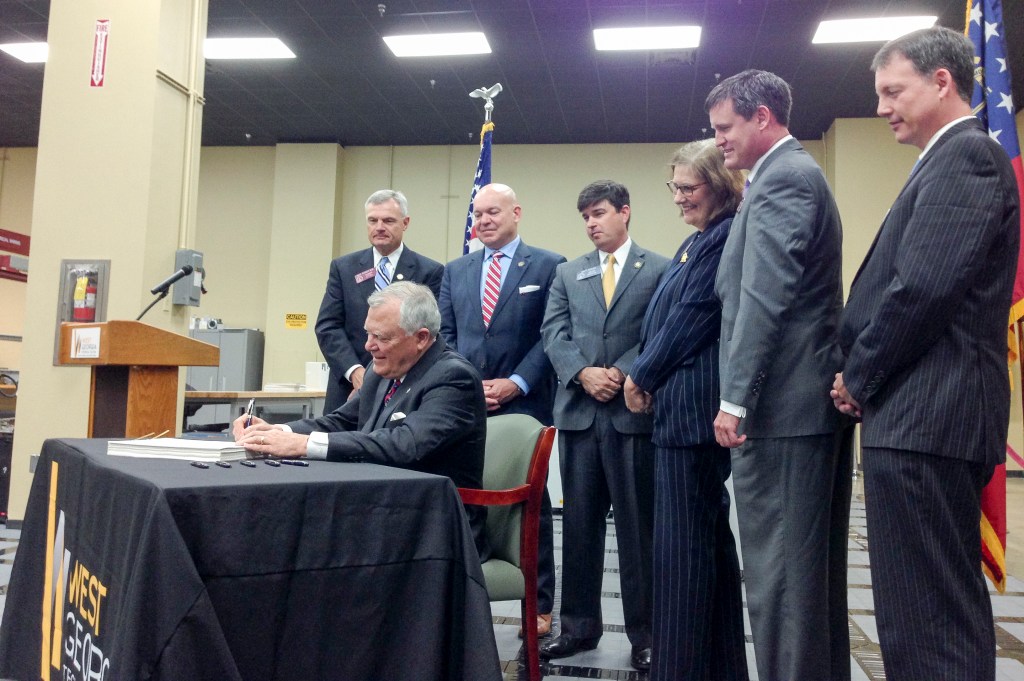 LaGRANGE – Gov. Nathan Deal spoke at West Georgia Technical College on Monday and signed the state budget which includes $11 million in funding for equipment at technical schools in Georgia.

Deal made the decision to sign the budget at WGTC to highlight the importance of the programs that this year’s budget will be funding like the newly enhanced lab at the college which he hopes will help train Georgians for the jobs opening up across the state, especially in nearby locations like Kia Motors and Sewon North America.

“One of the areas that was highlighted here today by the students that were present is precision manufacturing,” said Deal. “Those are skills – that along with industrial maintenance – which are two of the areas that are in our so called high demand career initiative. That means they have been selected because we know jobs are available in those areas if someone has the right skills and training, so we are seeing an uptick on that, and we now have some 12 major areas that qualify as high demand career initiative areas. The thing about that designation is that if a student will pursue one of those 12 areas, the state will pay 100 percent of their tuition at a technical college to do so.”

Some local industries have reported difficulty finding workers to fill positions that this budget would help fund training for due to not having enough applicants with the required qualifications. This need for qualified applicants has united state legislatures in their desire to connect Georgians with jobs.

“I think it is an investment toward making sure that we’ve got the types of equipment and resources that we need for that training,” said State Rep. Bob Trammell (D – Macon). “I think you can see by the students – and talking with some of the students here (at West Georgia Technical College) – the enthusiasm to work on some world class equipment, so they are transitioning into the workforce, and they are on this high tech equipment. They won’t miss a beat. … Having labs like this one in LaGrange also has the potential to attract students, not only locally, but from surrounding areas to get the type of training (they need) to step right into these jobs in our area.”

The commitment to job training was also a high point for the LaGrange-Troup County Chamber of Commerce which is currently working with both local schools and industry to make it possible for Troup County residents to qualify for the jobs opening up with new industry.

“Making sure that we attract and sustain a qualified workforce is a huge priority of our community right now, especially at the chamber, so for the governor and the general assembly to direct dollars for programs just like the one we are standing in (at WGTC) is critical for us to remain competitive,” said Chamber President Page Estes. “I’m very excited about the future opportunities that we’re going to have in partnering with the technical college system and with (kindergarten) through 12 (grade) to make sure we have a qualified workforce pipeline.”

The total budget is for $49 billion with almost $25 billion of that from the state and the remaining funds from federal sources. The plan also includes a 20 percent raise for state law enforcement and $1 billion for projects around the state, including renovations to local schools – like LaGrange High School – colleges and work on roads and bridges.

“The governor made a commitment to economic development from day one, and I think this budget reflects that commitment,” said State Sen. Matt Brass. “It is one thing to attract jobs to Georgia, but it is another thing to put Georgians in those jobs, and so as we put money towards workforce development and towards our technical college system, it is one more step towards putting Georgians into those jobs.”

“People are going to talk about this is the largest budget that we’ve ever signed, but we also have the largest population that we’ve ever had,” said Brass. “If you actually look back at past budgets compared to past population then add in inflation, we are actually back at the pre-2007 numbers, below those numbers on a per person basis, and so I think we are spending the money wiser then we once did, and we are directing it – we are investing it in Georgia, in Georgians, so that we can put it into those jobs. It is all about work force development.”

The new budget includes $20.5 million for Move on When Ready Students in addition to the program’s previous budget, a program for eligible high school students who which to take college level coursework for credit toward both high school and college graduation requirements.

The Three Rivers region of Georgia where Troup County is located had a 5 percent unemployment rate in March.