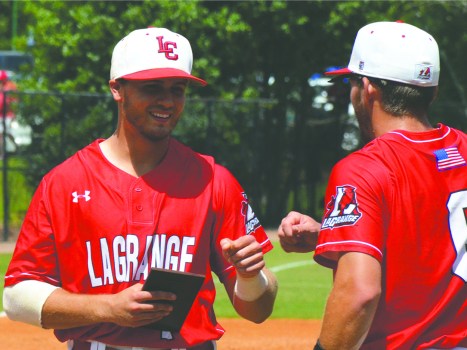 LAGRANGE – It’s been good to be back home.

Before joining the LaGrange College baseball program, Tavin Thompson was a standout player for Darton College in Albany, and he enjoyed plenty of success there.

At the close of the 2015 season, Thompson had used up his eligibility at Darton, and he was exploring his options as he looked for the place to continue his baseball journey.

Thompson, a former Callaway Cavalier, enrolled at LaGrange College in the fall of 2015, and he took the field with the Panthers when the season began the following February.

It’s a decision that has worked out well for Thompson, and the Panthers.

Thompson has been a staple in the lineup for the past two seasons while also anchoring a spot in the infield, and he has been a part of two extraordinarily successful teams.

A year ago, the Panthers went 30-13, and Thompson was one of the Panthers’ top players. This spring, it has been a memorable and historic season for the Panthers.

The Panthers are 38-4, they’ve set a single-season school record for wins, and they’re waiting to find out where they’ll be playing in the NCAA Division III tournament.

Thompson has started every game for the Panthers this spring, and he leads the team with a .386 batting average.

The Panthers have played 22 games on their home field, giving Thompson’s friends and family a chance to see him in action.

“It’s a lot of fun having hometown people come and watch me,” Thompson said. “It’s been real good.”

Thompson has been a critical part of the Panthers’ success.

He has been the leadoff hitter, and he has played that role to perfection.

Defensively, Thompson has 124 assists, which is tops on the team.

Thompson has helped the Panthers put together the best record in Division III, and the team is ranked first in both major national polls.

The Panthers figured to be an elite team this season with so many players returning from last year’s 30-win team, and things have fallen into place nicely.

“Coming into the year, we thought we had all the pieces, but everything has to come together,” Thompson said. “We knew coming in that we had a good lineup, and we were deep, and our pitching staff was really good. We didn’t have a whole lot of seniors, so that was big for us coming in.”