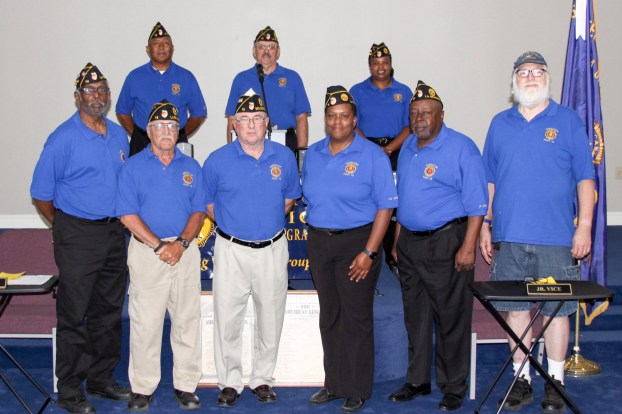 Members and leaders of the American Legion gather to celebrate the grand opening of the new facility opened by American Legion Post 75 on Friday, May 12. (Photo by Baker Ellis | LaGrange Daily News)

LaGRANGE – American Legion Post 75 unveiled its new location on Friday, May 12 with a ribbon cutting and grand opening ceremony. The new address for Post 75 is 722 Jenkins Street.

“You struck a vision not only to sustain a post, the vision was not about American Legion Post 75,” Mark Shreve, Jr Vice Commander of the American Legion Department of Georgia said at the ceremony it was about how do we help veterans and how do we have the infrastructure to help veterans? Well you’ve built it. That’s what you’re in today.”

The American Legion is America’s largest wartime veterans service organization with more than two million members, committed to mentoring youth and sponsorship of wholesome programs in our communities, advocating patriotism and honor, promoting strong national security, and continued devotion to our fellow service members and veterans, per the American Legion website.

“Our mission is to help fellow veterans to see that they have a great quality of life,” Shreve said.  “We’re going to continue to grow due to your efforts. You are the future of the American Legion.”

The new post is located in what used to be a much smaller structure, but has been developed into a full-service center for veterans.

“It is awesome to have the opportunity to be here,” Jake Christman, commander of American Legion Post 75 said. “When a veteran comes in here and needs help, whether it is with their utilities or they don’t have food, it’s nice to be able to help them. It makes you feel really good. That’s what we’re here for. We don’t have bingo, we don’t have a bar room. We’re just here to help veterans.”

Christman served 14 years in army in the Army from 1969-1983, and spent time in Germany as well as Vietnam during his service. While Christman has been removed from the Army for some time, he was turned onto the American Legion just seven years ago when he saw an advertisement in a magazine.

American Legion Post 75 was founded in 1919, and in two years the post will celebrates its 100th anniversary.

By Melanie Ruberti melanie.ruberti@lagrangenews.com Some third graders from elementary schools around Troup County were special guests at the Sheriff’s office... read more