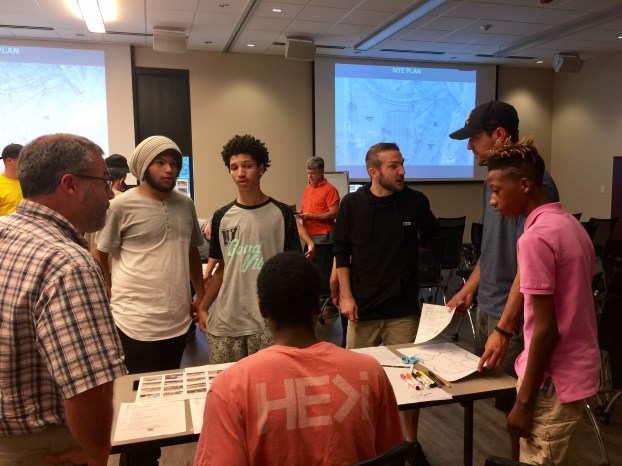 LaGRANGE – Skateboarders are one step closer to being able to legally flip, grind and have a good time near downtown LaGrange.

The City of LaGrange held a design workshop on Wednesday to discuss the layout and elements to be included in a proposed skate plaza near downtown. Several locations were considered for the skate plaza, but ultimately the city decided on a Bull Street location because it is a short walk from the square, near other recent city updates.

“The site has been identified,” City Planner Leigh Threadgill said in an e-mail. “It is located on property that is just south of the proposed Bull Street Expansion across Main Street from District 4 Public Health.”

Officials were excited about the turnout to the workshop and community input that they have received on the project with roughly 40 people coming out for this first workshop. The plans discussed in the meeting were created by Stantec Lead Action Sport. Pofessional skateboarder Kanton Russell has been over the design of the project.

“We definitely hired the right people with Stantec to help advise us through it, so that we can make sure that whatever is designed will be well used,” Mayor Jim Thornton said.

The city made the decision to build the skate plaza a little over a year ago, when safety concerns made it necessary to prohibit skateboarding in downtown.

“About a year ago, we had to pass an ordinance to prohibit skateboarding downtown because it was causing issues on the parking deck and some other locations, and so when we did that, when we passed the ordinance to prohibit it downtown, we wanted to make sure that we would provide an area for the kids to go,” Thornton said. “It has taken a little longer to get it developed and planned, but we think this will be a real nice amenity downtown. There were a number of folks there in their 20s at the meeting who skateboard, but it will give them a safe place to go off street.”

The skate plaza will remain as city property when construction is complete, but the area will most likely be maintained by the Troup County Parks and Recreation Department.

“I think anytime you are adding an amenity that is a good thing, so it is all about giving our residents choices,” Troup County Director of Parks and Recreation Cajen Rhodes said. “Not everybody plays baseball or softball. Not everybody likes to ride a bicycle. Some people like to ride a skateboard, so I think it will be a great idea.”

Progress on the skate plaza can be monitored at mysidewalk.com/organizations/293735/la-grange-skate-plaza.

Students look toward future at graduation

LaGRANGE – LaGrange High School set itself apart on Saturday with its own class spirit which led to both lighthearted... read more