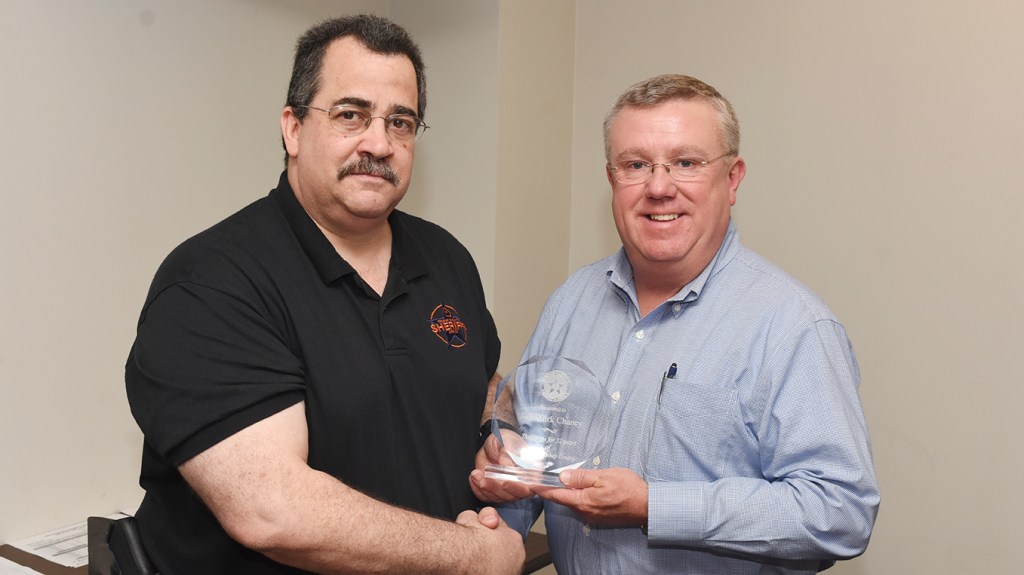 LaGRANGE – All the essentials for a good birthday party greeted Mark Chaney Thursday at the Government Center in LaGrange. There were cupcakes, presents and a room full of friends and family.

However, on this day his birthday was put on the backburner for another more important milestone — retirement. Chaney called it quits Thursday after 32 years with the Troup County Sheriff’s Department, and he timed it perfectly, so that he could retire on his 55th birthday.

“I figured it was fitting,” Chaney said.

Chaney was thanked by a room full of officers, who spent the morning sharing funny stories of his time on the force.

“Before I read this, you can still back out, but I once I read it, you cannot unretire,” said Sheriff James Woodruff with a big smile on his face.

From the back of the room, Chaney’s wife, Donna, yelled “he’s not unretiring.”

Chaney has plenty of reasons to call it quits. He said he had a third of his spine replaced five years ago and wants to spend more time with his family and grandchildren.

“The Lord led me into this, allowed me to do it and it’s time for me to retire to spend more time with my family and my grandkids, to get out of the way and let someone move into the position,” Chaney said. “I think I’ve done what I was called to do.”

Chaney worked as discipline protocol officer in the local schools where investigated incidents in and prosecuted when needed.

“The sad thing is a lot of times, I’d be the one standing next to the kid saying something positive, and I was the one that charged them,” Chaney said. “Trying to show them hey, you messed up, but we all do. Take what you’ve got, move on and learn from it.”

He also served on patrol for seven years and for his last five years he’s overseen the transportation of inmates.

On Thursday, he had a chance to hear from many of the people’s lives he’s touched through the years, including those within his own family.

“I enjoyed growing up as your daughter, number one, but as a police officer’s daughter, which sometimes can be hard,” said Mark’s daughter Allie. “I remember high school people coming up to me and thanking me for what you did for them and their family. That meant a lot to me and it showed me a lot of your integrity. You made us proud.”

Chaney said Donna has a list of projects for him to do moving forward, so he won’t be laying around watching television. He plans to spend more time with his three children — Allie, Meagan and Amanda — and his three grandchildren — Gage, Tyler and Zoey, while also staying busy.

“It’s time to start another chapter,” he said.