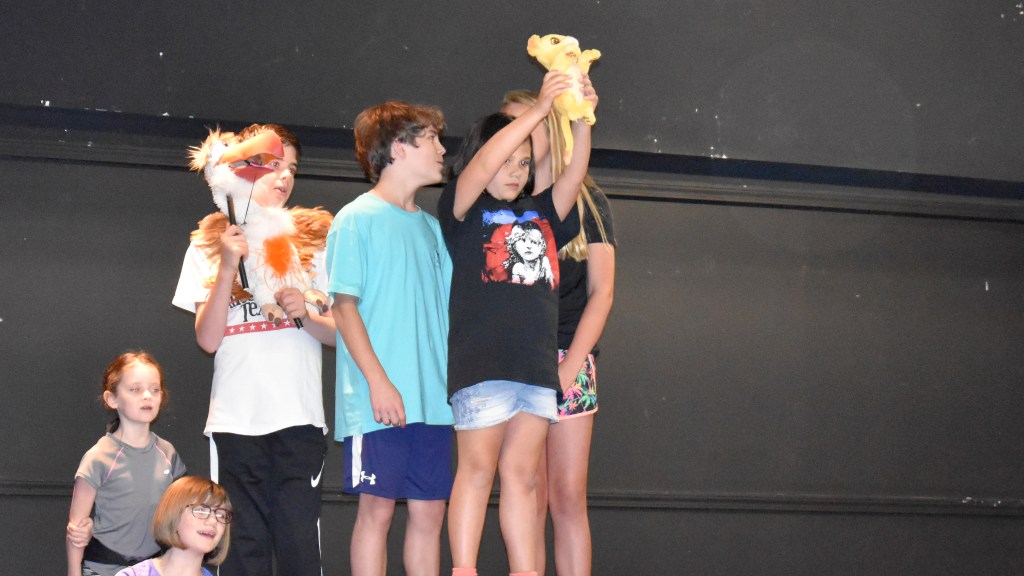 Campers practice the iconic scene from the ‘Circle of Life’ for their Saturday production of ‘The Lion King.’ (Photo By Baker Ellis | LaGrange Daily News)

The Lafayette Theater Company and Young Singers of West Georgia have come together once again to provide a two-week musical theater camp for children from second grade through eighth. The camp will culminate on Saturday, June 17 with a production of Disney’s “The Lion King.”

The summer theater camp has become a staple of the Lafayette Theater Company over the past 10 years, starting with less than 10 participants in the early years. Three years ago, instructors decided to add a public performance to the camp agenda, and the camp has grown rapidly ever since.

“Three years ago we decided to do a production, we put on an ‘Annie’ show,” Valerie Longshore-Sargent, one of the directors of the camp in charge of characterization and technical elements for the Lion King production, said. “Last year we incorporated the young singers and we did ‘Aladdin Junior.’ That had 25-26 kids. This year we have right at 40 kids.”

During the course of the camp, the students will work on staging, choreography, music as well as team-building games in an effort to increase the camaraderie between performers and reinforce the importance of working well with others.

“It’s really important to all of us that they understand that, like playing a sport or like doing anything, you have to learn to work with other people,” Longshore-Sargent said. “When doing a show, it is hugely important to understand your role and everyone else’s role.”

Bailey Orr, one of the performers and campers who will be in the Lion King production this year, has been involved with a number of performances with the Lafayette Theater Company in the past, including both the “Annie” and “Aladdin” performances. Orr began as a ballet dancer, but discovered a passion for the theater when she was nine.

“Around age nine I started to get into theater,” the rising sixth grader said. “It was then that I realized it was my passion. I love the feel of being on stage, and just feeling like people are happy with the performance. Seeing them laugh, seeing all their emotions show.”

“The Lion King” was picked as a theme because of how well Disney incorporates its Broadway productions for young voices, and for the educational element it adds as well

“How Disney has worked on their Broadway series is that they have adapted it for young voices,” Longshore-Sargent said. “It is perfect for their age range. They understand the story, so we can take what they already know and build on that.

“They are also speaking traditional African language,” she continued. “We are incorporating education in there to let them know it’s not just sounds they are saying during some of the songs.”

The show that will be open to the public will take place on June 17 at the Lafayette Society for Performing Arts with show times at 4 pm and 7pm.