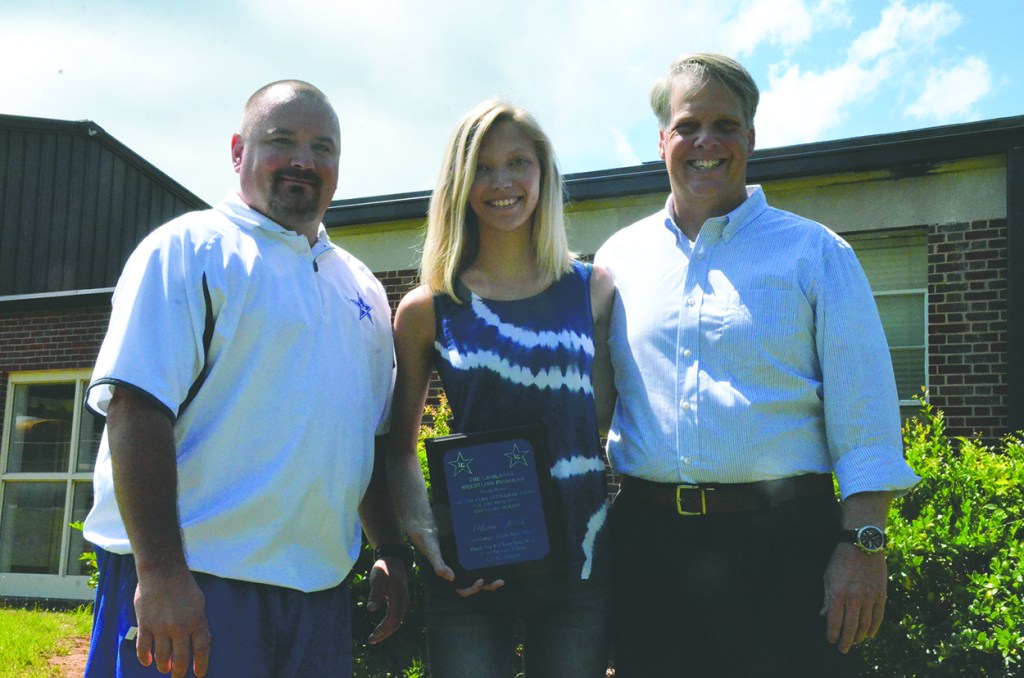 Clark Rich was a coach at LaGrange High, and he led the team to multiple state titles, and his brother John Rich was a championship wrestler at the school.

While Olivia Rich has never gotten on the mat, she was nonetheless a critical part of the program for the past five years.

Olivia Rich, the daughter of John Rich, was a mat maid for five seasons beginning with her eighth-grade year, and LaGrange head coach Scooter Weathers is greatly appreciative of everything she’s done.

Last week during a wrestling camp he hosts each year, Weathers recognized the contributions of Olivia Rich by presenting with her plaque as the only five-year mat maid in the history of the program.

John Rich, one of the best wrestlers in LaGrange High history, was on hand to pose for a photo with his daughter and Weathers.

“I’ve always said the mat maids are the most important part of the team,” Weathers said. “If we don’t have them, we can’t make stuff happen. You have to have mat maids to run the clock, tap the referees. You can’t have a tournament without them. They do a lot of hard work. They sit at that table all tournament. It’s a lot of work.”

Olivia Rich has been around the sport her whole life.

“She’s been involved in wrestling since she was old enough to walk,” Weathers said.

Clark Rich, Olivia’s uncle, was a part of the first-ever wrestling team at LaGrange, and he went on to wrestle at Auburn.

Clark Rich, who died in December at the age of 63, was inducted in the Georgia chapter of the National Wrestling Hall of Fame earlier this year.

John Rich, meanwhile, was not only a state champion at LaGrange, but he did it without losing a match.

“Clark had three state titles here, and John was the first ever undefeated state champion for LaGrange,” Weathers said. “He was a two-time state champion.

“So to have both of them coaching with me was special.”

Some of Olivia Rich’s earliest memories are of her time involved with wrestling.

“Since I was little, I was on the mat,” she said. “I had a poster for my student of the week, and it’s from Pre-K. I wrote on there that one of my favorite things was going to wrestling practice with my dad. That interest has always been there.”

Olivia Rich said she treasures the time she was able to spend as a part of the LaGrange High wrestling family.

For most of those years, her uncle and father were both helping out as coaches.

“I loved it. They felt like family, even though it’s a team,” she said. “Through the years, I’ve had so many brothers, per se. They’re great.”

Clark Rich was a full-time assistant at LaGrange, even as his health deteriorated.

While Rich was inducted into the Hall of Fame posthumously, he was aware of the honor before he died.

“I’m just glad he knew he went in,” Weathers said.