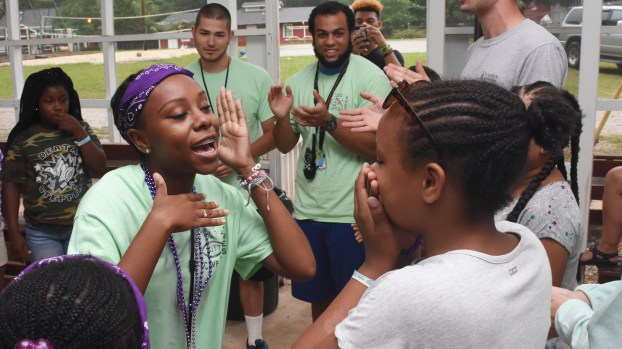 On Thursday at Camp Viola, another group of children were finishing up a week at the Christian camp, which is aimed toward children who might not have the chance to go to camp otherwise.

Serenity Graham, director for Western Heights Baptist Church, which sponsored this week’s camp, said the summer camp is run by ten local churches. Each take a turn operating the camp for one week. This week’s camp was for Berta Weathersbee

Camp Viola was created by Viola Burke in 1926 for students to have a special summer experience and to get closer to God.

“Camp Viola was created by a lady named Viola Burke, and she was actually a school teacher. And during her summer she would go and pick up students and offer a free camp, like a vacation Bible school,” Graham said. “When she passed away the one thing she left was the land to Troup county, but she wanted the land to always be for the students.”

The campers play games and make crafts with a focus on the participating church’s faith. The camp hosts about 50 fourth and fifth grade is the last year they can participate, Graham said.

“We have mostly fourth and fifth graders because I wanted to take them and grab them before they don’t get to come back,” she said.

Graham said the Callaway Foundation and the board of directors made sure to keep the campground open year-round as a nonprofit so anyone can use it.

“The property is open all year long and there’s a number of churches in Troup County that use it throughout the year. We also have colleges that come in and use it for retreats,” she said.

Assistant Director for Western Heights Elijah Patrick said the campers are usually hesitant when they arrive.

“They come out here and the first couple of days might be rough because they are used to their culture back home, but after the second day they are clinging on to us,” Patrick said. “It’s all about the kids.”

Graham said she likes participating as a director in the camp because she sees the growth of the campers.

“That’s what it’s all about, creating a generation that remembers coming out here and what it means truly experiencing God’s love and grace and fun outside,” she said

A grand time at WinShape