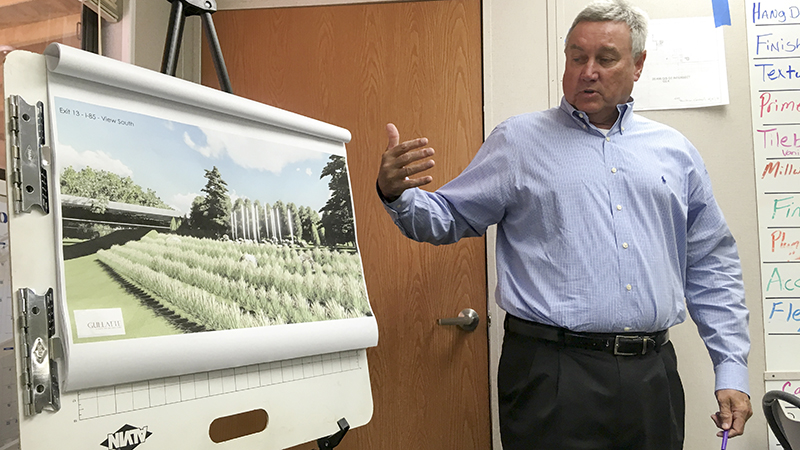 Much has changed in just over three years since The Ray beautification and energy efficiency project was proposed for the section of Interstate 85 that passes through Troup County.

The Ray is a project on Interstate 85 that focuses on creating a green corridor, with a focus on both plant life and clean energy. The Ray stretches 18 miles — starting at exit 18 and continuing to the West Point visitor center — and has already been recognized within the state for the technology installed as part of the project, such as a free tire pressure sensor and electric car charger at the visitor center. The center is also home to a butterfly garden and a sample section of solar roadway.

In the time since The Ray Foundation first started the project in 2014, thousands of potential jobs have been added to Troup County, including two major additions by the previously quiet exit 13, of a major manufacturer and a major resort. Those developments have necessitated changes to The Ray’s master plan, and representatives from the Ray C. Anderson Foundation and Gullatte Landscape Architecture came before the LaGrange City Council to discuss some of the changes to the master plan during Tuesday’s work session.

“When Gary (Gullatte) first created the plan for the five interchanges (or exits), it was not known at that time that Great Wolf Lodge and other large entities like Sentury Tire would be coming to this particular interchange,” said Allie Kelly, the executive director for The Ray. “It was also not known, at least to Gary (Gullatte) and the Ray, the phenomenal shape that the industrial park would take. The industrial park crosses over and includes part of the interchange.”

Because of all of the growth centered around exit 13, The Ray C. Anderson Foundation requested that Gullatte revise his original plan to better reflect the new businesses and the interests of the visitors they will bring to the area.

“We do want to not throw the baby out with the bathwater on the master plan that we did a few years ago, but we do want to enhance and embellish that and really make it come to life,” Gullatte said.

“Working with Alton (West, the director of Community Development for the City of LaGrange), we’ve already got an REBC (Roadside Enhancement and Beautification Council) Grant for $50,000 that has already been approved by Georgia DOT to do landscape work at this intersection, so we just want to leverage what we already have going, and that has no matching money associated with it, so that is really good.”

The City of LaGrange, along with other sponsors, have contributed to the project in the past, and the council has paid close attention to the major project that could potentially encourage visitors to frequent.

“We really want to try to create a look and a beautification approach to this interchange that will tie into the Great Wolf Lodge aesthetic and wet the appetite for the tourists who are coming south from Atlanta and are coming north from parts west on I-85 to get to this area for multiple days and evenings in LaGrange. A lot of those tourists will be coming for the first time.”

The city and county have paid attention to the plan is because of its potential to encourage out of town visitors to consider stopping for a bite to eat or to shop.