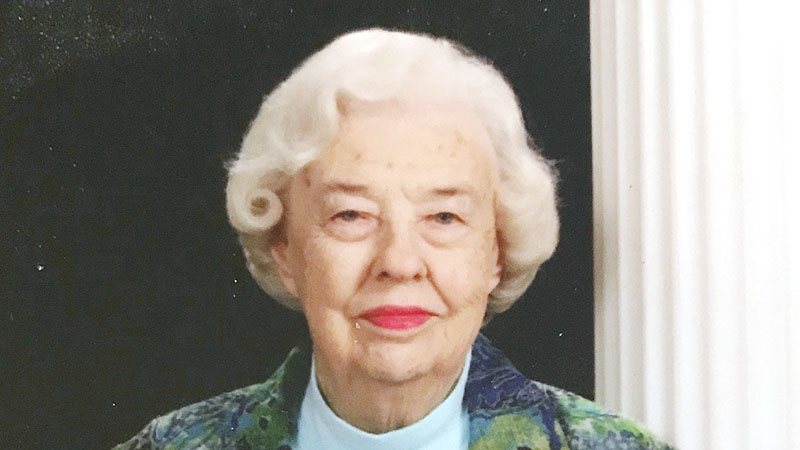 Dyar was born in LaGrange and always had a love for telling the stories of her hometown. She worked in journalism and public relations for 45 years before retiring in 1993.

In 2011, she published a book titled “Remembering LaGrange: Musings from America’s Greatest Little City.” Her work in the newspaper business started well before then. Dyar had written a weekly column titled “Memoried Glances” in the LaGrange Daily News since Dec. 22, 1993.

“Since my retirement as director of Institutional Relations at LaGrange College, I have wanted to enter a new door leading to an opportunity to continue writing,” Dyar wrote that day. “Loving history, newspapers and my hometown as I do, a natural project seemed to keep calling me — researching old newspapers for brief items of interest in LaGrange’s past. It would be hard for you to imagine the number of hours that will go into this project. I can’t believe it myself.”

Even then, Dyar probably didn’t realize just how many hours she’d put into her weekly column, and other related special projects. Each week, she spent time at the Daily News’ office or at the Troup County Archives going through the archives of old newspapers for her column, a look back in history from 100, 50 and 25 years ago.

“It is rare to meet someone as openly and obviously passionate about their work and community as Ms. Julia was,” Daily News publisher Baker Ellis said. “She was an inspiration, and will be sorely missed and fondly remembered by those she worked with at the LaGrange Daily News as well as the community at large.”

Unlike most traditional columns, which are opinion-based, Dyar recapped stories from old archives, retyping the most interesting headlines and stories from years ago. Memoried Glances published each Saturday in the Daily News. Her final column is published inside of today’s paper on page 12A.

“As far as researching and disseminating tidbits of Troup County history, she was the master of it,” said County Historian Clark Johnson. “We owe her a debt we will never be able to repay for all the little things she’s brought to light.”

In 2000, she worked on a special edition of the newspaper that eventually became so large that she decided to compile all of the information into “Remembering LaGrange.”

“The findings were too significant not to preserve and share in another genre,” Dyar wrote in the introduction. “This book is the result.”

Dyar was a fifth-generation resident of Troup County and earned a bachelor’s of arts degree in French from LaGrange College in 1946. She married the late Hubert Leinhardt Dyar in 1948, began writing a weekly column and was associate editor of the Royston Record for 10 years.

The couple then moved to Atlanta, where Dyar served as the assistant manager and later the manager of the Georgia Press Association until 1978. At that time, she was voted a lifetime member of the GPA.

Dyar then moved back to LaGrange, where she served as LaGrange College’s Director of Institutional Relations for nearly 15 full years before retiring in 1993. The 1987 edition of the Quadrangle, LaGrange College’s yearbook, was also dedicated to her.

“Julia made an impact wherever she went, and LaGrange College was fortunate to have her as a student, dedicated alumna and employee,” said LaGrange College President Dan McAlexander. “As a student, she was active in nearly every campus organization and held numerous leadership roles. As an alumni volunteer, she lived out her love for the college by serving in a multitude of ways, service that was recognized by her being named to the college’s Wall of Outstanding Alumni and being honored with the Distinguished Service Alumni Award. With professional skill and a personal touch, Julia made the college a better place, and she worked tirelessly to help communicate the wonderful things happening here with the world.”

McAlexander said the college recognized her involvement by declaring a Julia Dyar Day in 1986. She also served as the president of the Troup County Historical Society from 1982-1984 and was a member of The Roundtable, LaGrange’s oldest book club, which was founded in 1931.

The people who knew Dyar described her as a sweet, considerate person, but even people she never met had an opportunity to see her face and writing in print each week.

Former Daily News editor Andrea Lovejoy said when Dyar came into the office — then in her 70s and 80s — her work ethic showed.

“She outworked a lot of the younger people in the office on the days she was there,” Lovejoy said. “I would often use her as an example.”

Just about everyone mentioned how important being factually accurate was to Dyar and it reflected in her work.

“I admired her passion for newspapers, her matchless work ethic, her commitment to accurate, thorough reporting and her strong sense of purpose and integrity.  She was totally committed to the things she was passionate about and gave the same tireless service to her church, local history organizations, LaGrange College and the LaGrange community,” Lovejoy said. “I will remember her always with immense respect and gratitude.”

Matthew Strother, another former LDN editor, used to retype Dyar’s column each week. She always brought the column in typed out on a sheet of printer paper each Wednesday. The person who retyped her column changed over the years, but the style of writing did not.

“Her passion for history and the role of journalism as a living record of history in the community was second to none,” Strother said.

Dyar’s book ended with an epilogue that detailed how she recorded the information, but it also served as a reminder of how much she loved her hometown. She described LaGrange and Troup County the “greatest place in the world.”