Chief sworn in as IACP president 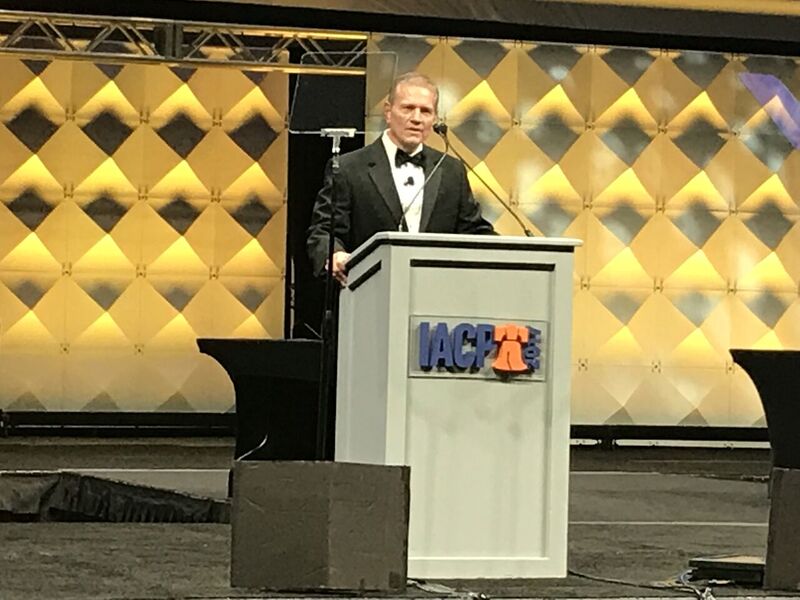 LaGrange Police Chief Lou Dekmar was sworn in as the new president of the International Association of Chiefs of Police on Tuesday in Philadelphia.

The IACP is the largest law enforcement leadership organization in the world and being named the president is an exceptional accomplishment for any police chief, especially a city the size of LaGrange. Dekmar has already set himself apart as a leader for positive change in the nation, with his apology for the department’s role in the lynching of Austin Callaway in September 1940 in January. He is believed to be the first police chief in the country to publicly apologize for his agency’s role in a lynching.

“For 125 years, the IACP has significantly steered the direction of the police profession in ways that support our 30,000 police leaders represented in over 150 nations,” Dekmar said. “Since the late 1800s, the IACP has been the gold standard in training, leadership development and management models that are recognized and adopted throughout the law enforcement world, and as our issues continue to change, our opportunities to steer our profession continue as well. A particular change that we’ve seen in the last several decades is the role of that has been thrust upon the police in addressing social problems.”

Dekmar directly addressed the need for police departments to acknowledge past wrongs in order to move forward and announced an initiative that will work to assist departments in doing so.

“This evening I am pleased to announce IACP’s TRUST initiative,” Dekmar said. “This measure will be partially funded by the million dollar Michael Jordan Grant. Its goal is to provide support and resources for police leaders who must engage with communities that carry the mistrust of the past into the present.”

Here in LaGrange, the LPD is currently taking part in several programs to address social problems at the local level including the recently formed ACTION, which seeks to strengthen the community and reduce risk factors, as well as the police sponsored CHASE program in schools, which teaches students about the risks involved with drug and gang activity. The LPD also works with the local mental health court and has a community outreach officer who works with individuals who have fallen on bad times. He also spoke on several national problems.

“People shot by police were previously taken to the hospital by the police for treatment three, five, eight or more times before that fatal encounter,” Dekmar said. “Recognizing (that) this as an international issue, the IACP developed the ‘One Mind Campaign.’ The One Mind Campaign asks agencies to commit to identify and partner with the Mental Health Resources in their area. With those partners, written directives are developed to address how police agencies will handle individuals affected by mental illness. And, most important, the One Mind Campaign seeks a commitment to provide specific training for all police personnel on the handling of persons affected by mental illness.  As president of IACP, I will continue to promote this critical program.”

He also committed to a focus on at risk adults, especially those over the age of 60.

“A staggering 1-in-10 ‘At-Risk Adults’ are victims of abuse, neglect and exploitation,” Dekmar said. “The IACP will join with key stakeholders to develop roll call‐training videos, investigative protocols and victim support services. This measure has already received a grant from the U.S. Department of Justice.”

In his speech, Dekmar thanked his family and the City of LaGrange government for success that the department has had.

“Of course, all of us who are in policing know that we are only as effective as the individuals that we work for,” Dekmar said. “I am blessed to work for elected officials that have only one demand on me and any other department head, and that is to provide quality service to our citizens.”

A group from LaGrange attended the conference with Dekmar for the special occasion including several city officials and representatives from the Troup County Sheriff’s Department.

“I am extremely proud of Chief Dekmar,” Mayor Jim Thornton said. “Being selected to lead his fellow chiefs from around the world is a great testimony to his ability, leadership and vision. It is also a great recognition for the LaGrange Police Department, which is recognized as one of the finest police organizations anywhere around.”