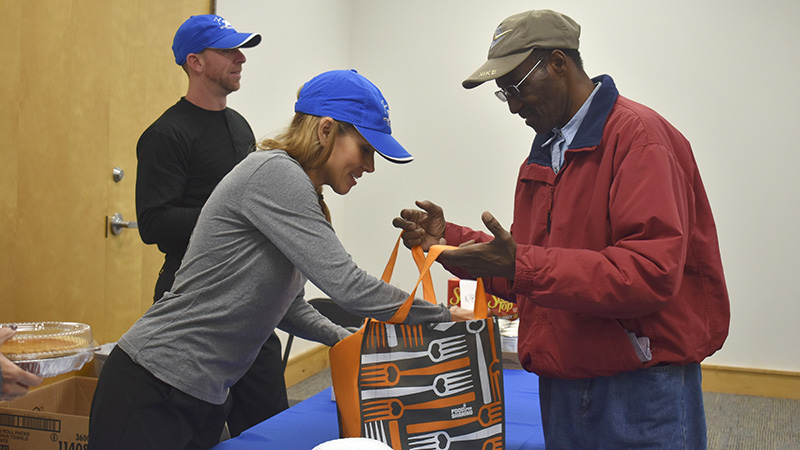 The Tyrone Poole 38 Foundation gave out about 50 turkeys, along with cans of cranberry sauce, green beans and corn Tuesday at the Mike Daniel Recreation Center. --Gabrielle Jansen

LaGrange native and two-time Super Bowl champion Tyrone Poole gave out Thanksgiving meals to the community Tuesday morning at the Mike Daniel Recreation Center. Poole said this is the first time he’s given out meals.

“This is the inaugural Thanksgiving turkey give away, but I plan to do it year in and year out,” Poole said. “Also, I’m thinking about Christmas as well. The [Tyrone Poole 38 Foundation] is going to do something for Christmas.”

The foundation gave out about 50 turkeys just to see the need of the community, Poole said.

“Again, this is just a pilot, so to speak. We could have done more, but we wanted to just get a feel for the desire of this being done,” he said. “If this goes well, which we are expecting, then Christmas will give us another opportunity to increase the giving.”

The foundation gave away turkeys along with corn, green beans, cranberry sauce and pies.

Poole said he understands the economy is tough and wanted to help the community save its money.

“That is a whole meal that basically someone doesn’t have to go spend money on, and they can use that money that they would’ve spent for Thanksgiving to do something else with it,” he said.

Poole is also a motivational speaker and has held seminars for children that teach them basic life skills. He said he wanted to add giving away food to his charity work.

“Not only am I trying to do something humanitarian with food and everything like that, but also the life skills, helping people be better as a whole,” he said. “I’ve always seen giving from my grandad helping people to my mom helping people. Food is just a way that people express themselves, their love, so to speak.”

At the giveaway, music played along with a drummer beating to the music to make the event brighter, Poole said.

“It’s just like walking into a store, you know they have music playing,” he said. “It kind of just makes the atmosphere more enjoyable and makes you kind of want to hang around a little bit longer.”