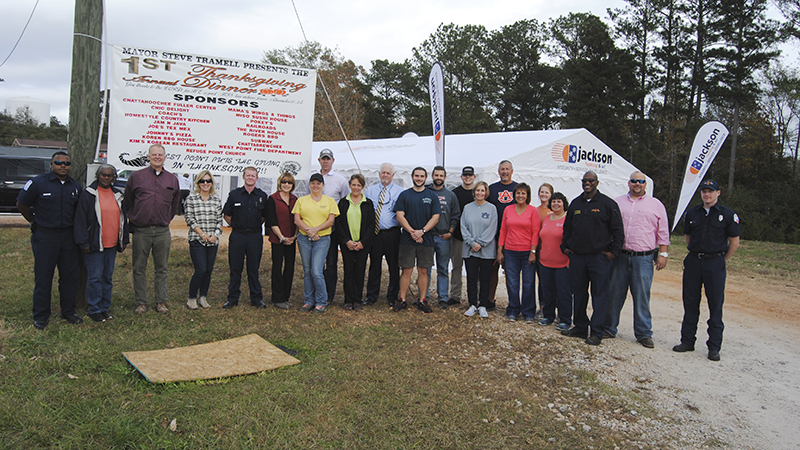 Restaurants in West Point, the fire department and Refuge Point Church will come together to feed 800 people on Thursday at the corner of 10th Street and Martin Luther King Drive. --Wayne Clark, Valley Times-News

Restaurants in the city of West Point, the fire department and Refuge Point Church will come together to serve a Thanksgiving meal for 800 people Thursday on the corner 10th Street and Martin Luther King Drive.

Mayor Pro-Tem Steve Tramell said the dinner originally started as a thank you to those who supported his campaign, but grew to serving the entire community on the holiday instead.

“I was initially just going to do something after the election. Just kind of a thank you, a little small, well maybe not small probably 200 or 300 meals and my wife said ‘you can’t keep doing this, you’re going to run out of money and not be able to keep it up,’” Tramell said. “So I got the idea to enlist all the restaurants and every restaurant in town came through.”

Tramell had Coach’s Bar and Grill and Railroads owner Matt Livingston contact other restaurant owners about serving the community. Livingston said all of them agreed to volunteer.

“[Tramell] asked me if I would be interested in feeding a few families on Thanksgiving for him. I said ‘yeah, absolutely. I think we can make this a little larger than what it is.’ I said ‘let me call a few other restaurant owners, and see if they’d be willing to participate also,’” Livingston said. “So, I started calling restaurant owners and every one of them is all about giving and taking responsibility for certain items and going forward with it and making it a big community event. The mayor went ‘if we can get this many, let’s go ahead and talk to all of them.’”

Livingston said that West Point restaurants are either cooking a dish or will be serving the community with additional volunteers Thursday. Also, the Refuge Point Church will deliver meals to those who cannot leave their house, Livingston said.

“The vibe around here is just tremendous,” Livingston said. “It’s crazy how many people stepped up and just wanted to do it.”

Livingston said it will be a traditional Thanksgiving meal with turkey, stuffing, mac and cheese and even a sweet potato soufflé.

“It’s just a great thing to help serve needing families in our community,” Norman said. “[Livingtson] contacted us and asked us if we’d be interested and that’s how it started. He contacted us and Johnny’s [Pizza], and we showed our support, and I think it was like a domino effect after that.”

The dinner will take place at 11:30 a.m. Tramell said he hopes he can keep on doing this as long as he is mayor of West Point.

“We’re calling it our first annual, and we’re going to start doing it every year,” Tramell said. “It’s going to be a big event and hopefully an annual event.”

Livingston said serving the community is the main priority.