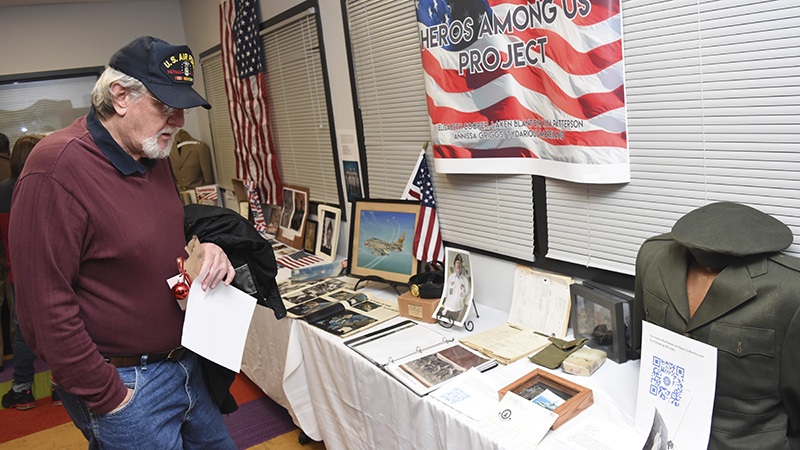 Above a veteran looks over the Heroes Among Us Project completed by Ken White’s class at THINC Academy. --Daniel Evans

For the last two months, Ken White’s constitutional theory classes at THINC College & Career Academy have worked with military veterans on a special project. They’ve collected memorabilia, interviewed veterans and put together projects detailing their time in the armed forces.

The project, titled “Heroes Among Us,” culminated Thursday when the class showed off its work. The class invited veterans and other community members to see the projects, and many were overwhelmed at the great detail the sophomore students went to complete the projects.

“It’s been kind of emotional,” said Charlie Warner, whose dad, Ray Warner was in the military.

Part of his dad’s memories, including photos from the Holocaust, were used in the project.

“They’ve done such a great job with it,” Warner said.

The overall exhibit included military uniforms, medals, badges and images depicting times of conflict in our country’s history. Even class members admitted that it came together better than they could’ve ever imagined.

“It was a new experience, but I think I learned a lot from it,” said sophomore Jalen Parkmond. “I learned how to work with a group and learned that everybody is different. Every veteran story is not the same as the last.”

White was emotional talking about the project.

“I can’t even begin to describe the stories we heard and the growth of these young men and women who have taken the challenge of interviewing these adults of another generation,” White said.

The top two projects, which were announced Friday, will be displayed at The Legacy Museum. The first place project was by Katylin Bartlett, Quindashia Hollins, Corneilus Tucker, Victor Plamer, Isaiah Dickens and Jackson Huckleberry.

“I had no idea that they were going to be this in-depth,” said Shannon Johnson with The Legacy Museum. “I was fully expecting standard high school trifold boards and that kind of thing, but then I came in and saw all the artifacts and primary sources they used. They’ve done a tremendous job.”

Johnson said they’ve already created the space for the projects to be displayed. She said the best part about the project is that it brought together two different generations.

“It’s really neat to see people her age, interacting with people his age,” Johnson said while pointing out a student talking with a veteran.

Tziah Settles stood by her group’s table as veterans walked by. She talked to many of them and heard parts of their stories.

“Seeing the pictures we put up, it was really bad back then,” Settles said. “I feel that being that we got to connect about what they were going through in the past, we can appreciate more in the future.”

Many of the veterans reminisced with old friends while looking at some of their old memorabilia. White talked to just about all of them and many expressed their gratitude for the project, and asked how they can help in the future.

“It lets me know that they haven’t forgotten us. At one time, the veterans, they had forgotten us. This brings back memories,” said veteran Henry Kelley.

“They never knew what they went through. Now you bring all of this together, and it just shows you. It was kind of hard when I came back to tell somebody about it, but after I see what we’ve got in the room, putting everything together, all the veterans and different things here, they can understand what we went through.”