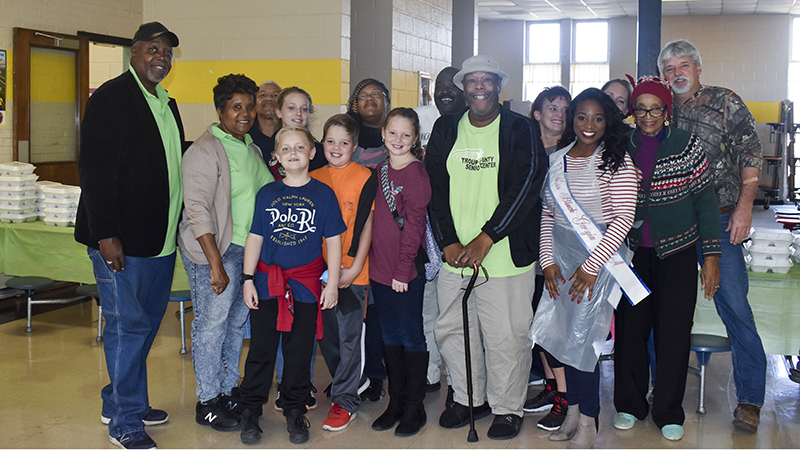 Up All Night volunteers take a break from feeding hundreds of locals to take a quick photo on Monday. (Alicia B. Hill | LaGrange Daily News)

For the 28th year in a row, LaGrange experienced its own Christmas miracle as a handful of volunteers with some community support were able to provide a Christmas dinner for over 500 people.

The Christmas and Thanksgiving dinners started when a few locals decided to see if they could help feed a few people in the community during the holidays. That effort has since grown into what is now called the Up All Night Thanksgiving and Christmas dinners which have fed nearly a thousand people some years.

“It is just something I started when I was on the radio doing gospel music, and they already had some Boy Scouts doing this, but there were only about four or five,” Jake Sessions said. “So, I said, ‘well, the Boy Scouts serve about 12 meals. I can help them.’ I went on the radio, where I sang gospel music, and I said, ‘let’s get this devil back in this house of faith.’ We’ve been doing it ever since.”

“It has really grown with the community, with their input and output,” Jimmy Edwards said. “This is absolutely what makes it worth everything here in LaGrange: feeding needy people.”

This year was the last year that Sessions plans to organize the event, and while little is expected to change as he steps back into a supporting role, other organizers were appreciative of his effort over the years.

“We truly want to thank Jake Sessions for 28 years that he’s been doing (this),” Edwards said. “He is going to continue to be involved with the dinner, but it is going to have new leadership.”

Humane society gets pets home for the holidays